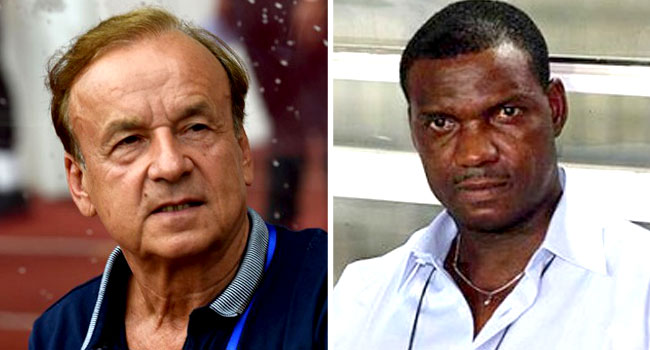 Former Super Eagles coach, Augustine Eguavoen has revealed that he was not in support of the sack of former manager Gernot Rohr.

Eguavoen noted that he kicked against the decision because of the timing being barely a month to the start of the 2021 Africa Cup of Nations (AFCON) in Cameroon.

Rohr was sacked in December 2021 after the Franco-German tactician secured qualification for the third round of the World Cup Qualifiers for the Super Eagles.

Eguavoen took charge of the Super Eagles of Nigeria barely three weeks to the start of the 2021 Africa Cup of Nations (AFCON) in Cameroon.

While speaking on Monday Night Football, Eguavoen stated that it was the decision of the Nigeria Football Federation (NFF) to sack the former Super Eagles coach before AFCON 2021.

At the time, Eguavoen was the Technical Director of the Nigeria Football Federation (NFF) but he said that he warned the NFF against taking the decision.

According to Eguavoen: “Yes, I complained about the timing as it was too close to the Africa Cup of Nations.”

The 56-year-old tactician said this in response to comments made by former Nigerian international Victor Ikpeba on the show.

Ikpeba had said: “Eguavoen was not in support of the decision to sack Rohr.”

Eguavoen has since stepped down from the interim manager position of the Super Eagles and moved back to his initial position as the Technical Director of the NFF.

NFF board members asked to Resign