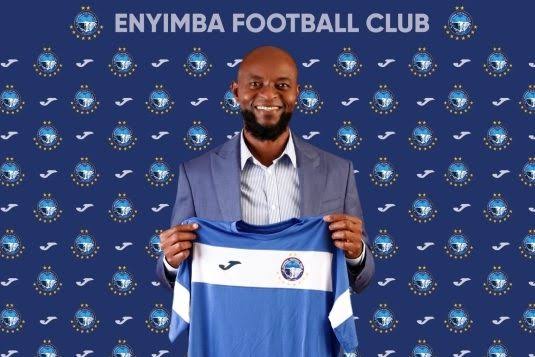 Enyimba head coach Finidi George has praise his player’s fighting spirit after their triumph in a narrow 1-0 win against Rangers in the Oriental Derby on Sunday.

The Elephants are still unbeaten this season after three victories in the CAF Confederation Cup and last week’s league win at home to last season champion Akwa United.

Before the Finidi led side looks fitter and sharper and they dominated the first half with several goal opportunity went begging from Eze Ezekwutoziam, Victor Mbaoma, and Ekene Awaziem.

Both Enyimba and Rangers had chances to win the tie in the second half, with the Flying Antelopes particularly enjoying a good spell after the break.

However, when everyone thought the derby will end in stalemate Chukwuemeka Obioma, came off the bench to net an 88th minute winner to the Elephants all three point on the night.

With Finidi’s two wins out of two in the 2021-22 NPFL season, could not hide his delight at seeing his charges battle to victory at a tough ground.

“Games are not won in thirty minutes. You have to fight, you have to work towards winning the game throughout the ninety minutes.”

“My players did their best, kept pushing until we had that goal. We would have scored in the first half, Victor and others, but the goal did not come.”

“In the second half, also we had one or two chances. But Rangers also did well. They pushed a bit in the second half. And I’m glad that at the end of the day, we deserve this victory.”

The Elephants will hope to continue their impressive form in the new NPFL season, when they face off with their next opponent in the match day three of the league on Wednesday.