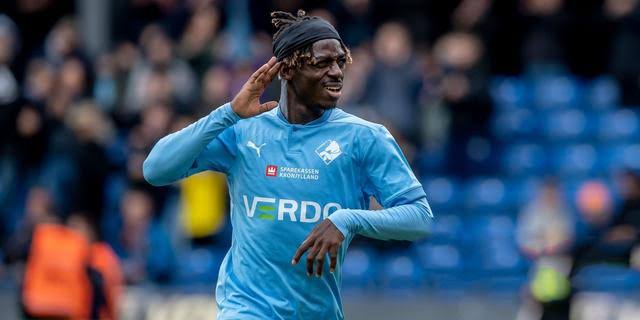 Former MFM striker, Stephen Odey, managed to score in the last minutes of his sides 1-3 home loss to Leicester in the UEFA Europa Conference League clash on Thursday.

The goal was the former NPFL goal king’s fifth in six matches across all competition in February for the Danish clubside.

Randers, prior to Thursday’s tie with Leicester, had been properly dealt with in the reverse fixture against the Foxes last week by 4 goals to 1.

The hosts, having missed so many goalscoring chances in the tie, ultimately paid for their profligacy upfront as a second half brace from James Maddison kick-started a frustrating night in front of their fans.

However, the Nigerian forward, Odey, did well enough to deny Leicester a first away clean-sheet after fourteen attempts when he capitalized on a Schmeichel mistake to bag a memorable consolation.

Other Nigerians in the match includes Wilfred Ndidi and Kelechi Iheanacho who was brought on board to replace James Maddison in the seventieth minute.

Both Ndidi and Iheanacho bagged one assist each, while Ademola Lookman had a silent night all through the encounter

EYFC 2022: OORBDA to install borehole at the Muda Lawal Stadium