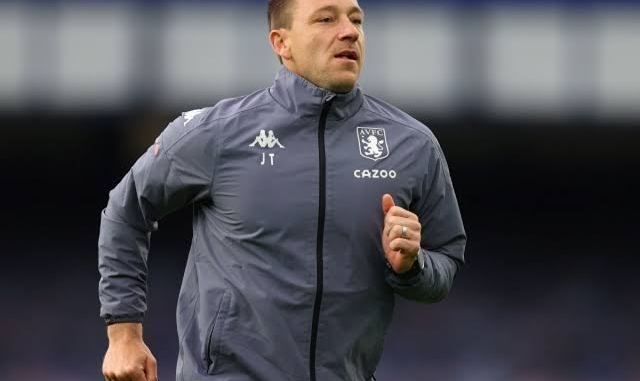 Aston Villa assistant manager John Terry is in talks about a Chelsea return.

The Athletic reports Terry will return to west London to assist the youth development side of his former club Chelsea.

The outlet reports that the ex-defender has registered an interest in a number of vacancies in the English game – confined to the top two divisions – but ‘was politely let down’.

Having seen former team-mates Wayne Rooney, Frank Lampard and Steven Gerrard take their first steps in management just outside the Premier League, Terry is hopeful that he can follow in a similar vein, beginning at a second-tier club.

While it is reported that Terry was ‘politely let down’ for various roles, it is suggested that he is prepared to bide his time before selecting his first head coach role.

It is understood that a second tier club with a low budget does not appeal to the Blues legend, and he would rather take on a project with enough financial backing to allow him to develop his vision and identity.T

he 41-year-old still lives within a stone’s throw from Chelsea’s Cobham training base and it is reported that his close ties with former team-mates Petr Cech and Carlo Cudicini – who occupy roles at the club – and academy director Neil Bath, has helped him make a return to his old club.

Moura Proving His Worth At Spurs – Conte

Wilfried Zaha Slammed For His Reckless Moments Of Madness Against Tottenham