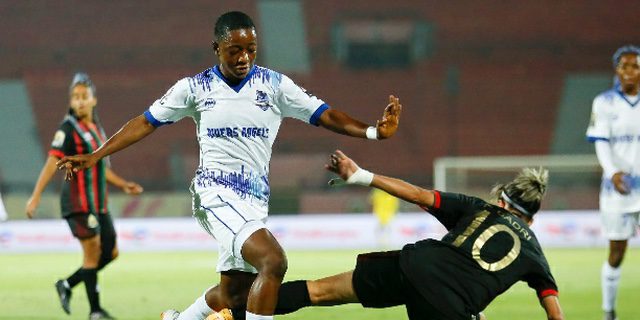 Nigeria’s flag bearer in the CAF Women’s Champions League River Angels, will hope to make amends with their clash against South Africa based club Mamelodi Sundowns today, following their disastrous defeat against ASFAR of Morocco on the continent at the weekend.

The ‘Jewel of Rivers’ are placed bottom in group B with zero point alongside Vihiga Queens of Kenya, who lost 1-0 to Mamelodi Sundowns in the first group game.

The defeat suffered against the Moroccan outfit in the first group fixture means the Jewel of Rivers needs to bounce back with a convincing win in their second game against Sundowns today, for them to keep their dream of qualifying to the next round of the Women’s maiden edition competition on the continent.

The gaffer of the team Okon, while speaking during his presser on Monday, said “he is not bothered about the heroics of the South African side from their opening game but focused on getting the best off his ladies”.

He said “I think the team has rested now, and we will give it our best”.

“It doesn’t matter if we watched Sundowns play or not, games changes and we just only have to do our maximum efforts”.

“We don’t want to recall the last match, every player can make mistakes. Every team is good, therefore they are all here with us”.

Meanwhile, Mamelodi Sundowns coach Jerry Tshabala also shares his opinion that “the game is probably the biggest encounter, we know Rivers Angels are strong but we see an open way for tomorrow’s (Tuesday) three points”.

“They will use space on the wings, they are a strong team but we will fight to win the game”.

“We are happy they finally arrived, we cannot be deceived by their first match they can play a very better football”.

With three point at stake today, the Nigerian football loving fans will hope the Jewel of Rivers pick all maximum point against their rival in their second group game today.