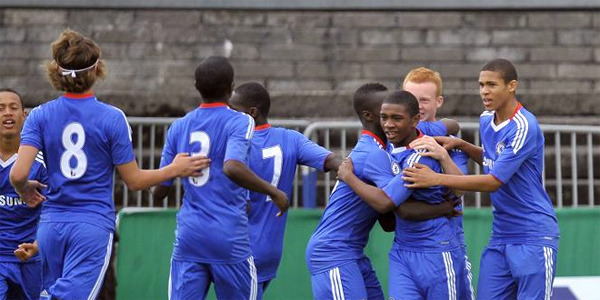 How To Join Chelsea Football Academy From Nigeria

Chelsea’s representative in Nigeria, Noah Olivier and President Soccer Africa Sports Management, Dominic Egbukwu, as far back as 2012 disclosed that the Premiership giant was going to open a multi-million Naira football academy in Lagos.

They told Daily Sunsports that the camp would be located in Victoria Island, Lagos, and would serve as Chelsea’s breeding ground for promising young Nigerian players.

“Nigeria, Cote d’Ivoire, Ghana, Cameroon and South Africa have been picked in Africa by Chelsea FC for its academy camp.

“My French partner, Olivier, and I have been mandated by Chelsea to take charge of the camp in Nigeria.

“Initially, they were scared of including Nigeria because of the Boko Haram issue, but we succeeded in convincing them that there was no cause for alarm in Lagos.

“We are expecting a 10-man Chelsea delegation from England any moment from now.

“They want to come and make an inspection before giving us the go-ahead to throw the camp open.

“It’s going to be a big camp and it will admit about 500 youths between 15 and 18 years old after the screening which will hold at the National Stadium, Lagos.

“Arrangements will be made for the feeder teams of the teams such as Barcelona, Real Madrid, Manchester United and PSG to come for invitational tournaments.

“The outstanding players among the trainees will be given an opportunity to join the Chelsea youth team in England, just like they picked Kenneth Omeruo.”

So how to join the academy is not feasible for now, you’ll have to wait.

Any semblance club you see at the moment are some boys clubs that go under the name Chelsea FC such as the one in Omole, Ojodu, Lagos.

There’s another one in Rumuola area in Port Harcourt, but these clubs are in no way linked to the Premier League side.

Once the  Chelsea Football Academy in Nigeria starts, you will see that the youth academy will make open trials public as well as their scholarship and their contact number, summer camp, soccer school, application form, fees (or if it’s free) and other stuff.

For the now, I can’t teach you how to join the academy until it becomes operational in Naija.