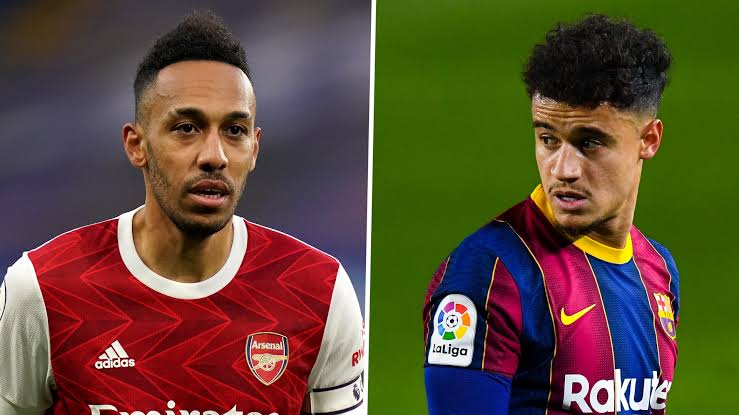 Arsenal are set for a player exchange deal with Barcelona if they decide to let Pierre-Emerick Aubameyang leave in January.

According to report, the Calatan giant are eyeing a loan move for the Gabon international after he was stripped off the team captaincy and frozen out of the team by Arteta, following his latest disciplinary breach.

The former Borussia Dortmund forward his currently training away from the rest of the team, while he’s also facing an uncertain future with the Gunners’ with just 18 months left on his contract.

With Barcelona also expected to recruit new players in the summer, City’s Ferran Torres and Aubameyang are the main target for the Spanish side.

With reports from Arsenal’s camp, Barcelona could table a swap deal in a move to suit both parties, with former Liverpool star Philippe Coutinho a prime candidate in a deal.

The Brazilian have found game time at Barcelona hard to come by, with Arsenal interested in him his versatility would prove profitable for the Gunners on the left wing as well as the number 10 position.

Ousmane Dembele is another player who is also been listed for the swap deal of Aubameyang to Barcelona, however, with the situation right now nothing is confirmed yet for both clubs.