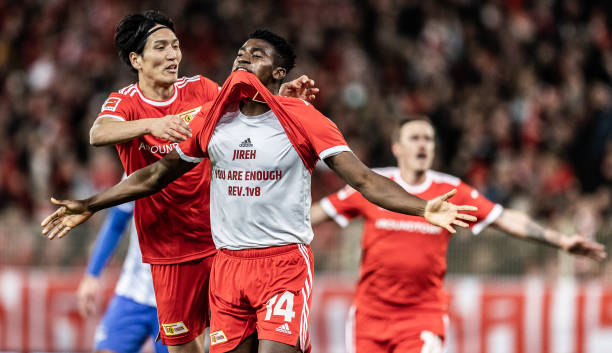 Union Berlin boss, Urs Fischer, has said that the club would not hesitate in releasing forward, Taiwo Awoniyi, if he’s included in Nigeria’s squad for the African Cup of Nations slated for next year in Cameroon.

The 24-year old former Liverpool forward is is Union Berlin’s leading scorer this season with 11 goals in all competitions and on Saturday, he netted his ninth league goal of the season for The Iron Ones during the 2-nil derby win against Hertha Berlin.

However, Awoniyi was able to feature for the Super Eagles once during Nigeria’s series of qualifiers under the outgoing Gernot Rohr, but he could get solid in the team under the new boss who is expected to lead the team to Cameroon.

Fischer in a chat with berliner-kurier.de said the club would gladly release the striker for the national team assignment if he’s included in the team.

“We don’t worry about it and of course we have it on our radar,” Fischer told berliner-kurier.de.

“What could be nicer than representing your country? Even if it doesn’t help us, we would be happy for Taiwo.”

“He has learned to stay calm in the pit and can withstand the pressure better there. I do believe that Taiwo has worked on itself,” he concluded.

Awoniyi will be a great addition to the team given the uncertainties surrounding the availability of Victor Osimhen for the AFCON.

Osimhen Ruled Out For Three Months, To Miss AFCON

Three Players Rohr could be banking on for victory against Liberia