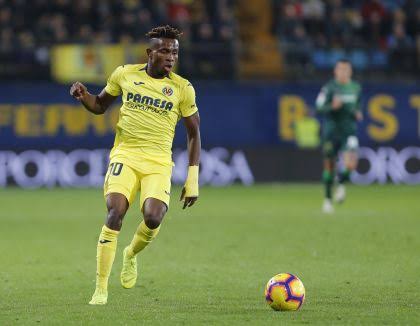 Samuel Chukwueze will be among the last batch Super Eagles contingent to report to camp ahead of the 2021 Africa Cup of Nations in Cameroon.

According to reports in Spain, Villarreal will delay the release of the Super Eagles winger to the Nigeria Football Federation until after January 3, 2022.

The Yellow Submarine manager, Unai Emery will be able to count on the Nigeria winger Chukuwueze and other African players in the team for their LaLiga clash against Levente on January 3.

The Nigeria Football Federation stated in a press release that non Premier League players are scheduled to begin arriving the team camp on December 29.

However, the Confederation of African Football CAF overruled the decision of the NFF on Sunday, stating that players heading to the tournament in Cameroon will be allowed to play fixtures between December 27 and January 3.

As such Chukuwueze’s release will be delayed for their game against Levente, and has been instructed to return to Villarreal once the Eagles crash out of the AFCON.

AFCON 2021: Dennis Will Be A Major Blow For Watford -Ian Wright