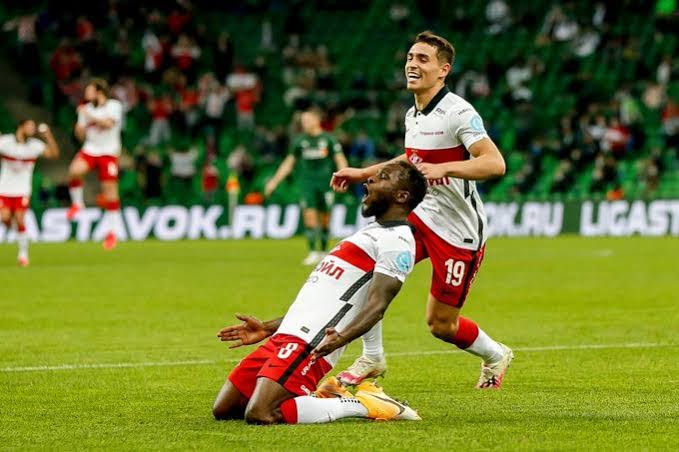 Thursday will be a night to remember for former Super Eagles winger, Victor Moses, who on his return to england, fired his Spartak Moscow side to a second half lead against Kelechi Iheanacho’s Leicester City in the UEFA Europa League.

It was Moses’ first goal for Spartak Moscow in sixteen outings across all competitions this term, and it came right on time when The Gladiators needed it most.

After the first half had ended in a barren stalemate due to the resilience of both teams on the back foot, Moses gave the visitors a shocking lead after the first six minutes in the second forty-five.

Mikhail Ignatov produced a brilliant cross from the right wing to find an unmarked Victor Moses, who guided a header past Kasper Schmeichel and spurred the Russians in the King Power’s stands to joy.

The Foxes rallied round for an equalizer and got one via a header from Daniel Amartey.

As Rodgers looked to pump more adrenaline into the team, he brought on board Wilfred Ndidi and Ademola Lookman and shortly afterwards, The Foxes had an opportunity for scoring the winner when Moses impeded Lookman in the box.

Vardy’s penalty was well saved by Aleksandr Selikhov and despite Leicester’s late surge, the match still ended in a tie.

Meanwhile, Super Eagles forward, Kelechi Iheanacho played the entirety of the game but was kept at bay by the Spartak Moscow’s defence.

The draw keeps Spartak Moscow on the fourth place with four points in the Group C of the UEFA Europa League, one point a adrift Leicester who also trails their next opponent (Legia Warsaw) by one point on the log.