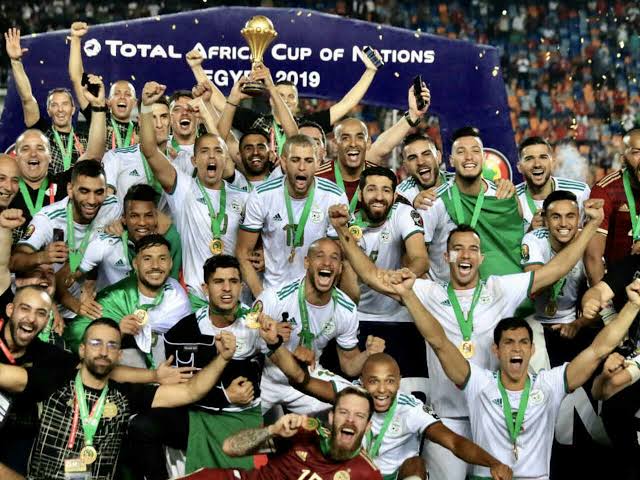 The start of the new year brings about the start of the biggest football competition on the continent, 2021 Africa Cup of Nations set to kick start in five days time in Cameroon.

As such, football competition will always be an avenue for superstars to further enhance their legacies, whilst the upcoming players would wants to step up their game to become a star, and the unknown also trying to become known in world football.

The last edition saw young Empoli midfielder Ismael Bennacer emerged into the limelight by winning player of the tournament, which eventually earned him a lucrative move to a bigger club six month later.

So with that in mind, as we prep up for the AFCON. Who are the players fans should look out for?

Here on Isagoal, we’ll go through ten players to look out for when the competition commences in Cameroon.

Riyad Mahrez is obviously the biggest star in the Algerian national team and as a matter of fact, we knows what his capable of doing when on the pitch in terms of his quality and leadership aspect of his game.

However, Qatari based Belaili is no doubt the player the Algerian fans would be on the look out for, having shown he’s got what it takes to lead the line for the Foxes at the just concluded FIFA Arab Cup in Qatar which they won.

The 29 year is proving to be a late bloomer with his current form both for club and country where holding a regular berth in the national team is really tough, but he’s been churning out commendable performance for the national team.

Haller would definitely be oozing with a lot of confidence going into the Africa Cup of Nations in Cameroon, having started life in the Eredivisie and the UEFA Champions League with a great form.

The towering striker was born in France to a French father and an Ivorian mother, played for France at youth level before pledging his international future to the Elephants and he would get to represent his nation at the biggest football competition on the continent.

He was instrumental in helping the Elephants qualify for the AFCON, as such his obviously the man to be on the look out for having scored lot goals both for country and club this season.

Aguerd is one of the few homegrown players in the team who came through an academy in the country, but failed to secured a move to Europe until his breakthrough in France with Rennes.

The 25 year old has been one of the best defenders in the Ligue 1 this season with Rennes and should he keep up with his form, a lot would be expected of him when his team fills out against their opponents.

Aguerd is a defender at 1.9m tall and that alone is a great advantage for him when it comes to marshalling the defence when his team faceoff with some of the best strikers in Cameroon.

The last time Burkina Faso player in the final of the AFCON in 2013 Bance was the star player for the Stallions, but for this AFCON edition billed to commence in five days time in Cameroon Bayer Leverkusen defender Edmond Tapsoba is the player to look out for.

At 6ft 4in, it’s show he’s a towering defender that would pose a threat to any striker and he has always shown his a dominant force in the backline for both country and club.

Should the 22 year old bring his form to the national when they face off with their opponents, perhaps that could help him secure a mouthwatering deal to a bigger club after the AFCON.

Naby Keita is no doubt the starman for the Guineans, but the youngster the fans would like to see dazzle his RB Leipzig’s star Moriba who recently switched allegiance to the country of his birth, even though is eligible to play for Spain.

Moriba left Barcelona in the summer following their financial woes which means they will have to let go of some players, as such the youngster was one of the player pushed out the door to Leipzig in a £13.5m transfer.

Should he make his debut for Guinea at the AFCON this month, the youngster could make a mark for himself and end up been fans favorite at the end of the tournament.

If you’re in doubt about how good the CSKA Moscow star his, ask players in the Russian league or perhaps defenders he faced during the World Cup qualifiers he featured in for Eagles.

The CSKA Moscow nimble winger his so good that he won back to back individual award for his outstanding display for the Russian giant this season, which gives credence to the fact that he remains one of the players to be on look out for in Cameroon.

This AFCON in Cameroon would be his first official competition for Nigeria, should he go on dazzle the fans with his electrifying pace bigger clubs would definitely coming calling for his signature.

Big things would be expected from Bissouma at the AFCON this month when Mali fills out against their opponents, the midfield meastro has set the bar very high by playing a crucial role in Brighton’s midfield this season in the English Premier League.

The central midfielder has been attracting interest from top clubs across Europe having consistently shown he’s a big player that could go toe to toe with other midfielders in world football for the Seagulls, with his excellent defensive prowess through interceptions and tackles.

Going into the AFCON Bissouma’s presence in the middle of the pack alongside RB Leipzig’s Mohamed Camara would be needed to help the team have a great tournament.

With Asamoah Gyan not included in Ghana’s AFCON squad it’s means the Ayew brothers would be the leaders of the team going into the competition, that is set to start in five days time in Cameroon.

However, there’s a certain Sulemana who ply his trade in Ligue 1 with Rennes, whom the Ghanaian fans would hope to see him dazzle and bring his form down to the national when faced with their oppositions.

Aged 19 which means he still has a lot in his arsena for both club and country, should he go on to announce himself at the AFCON a big move to LaLiga Santander, Premier League or Serie A may just be the next thing for him.

Arsenal forward Pierre-Emerick Aubameyang is the biggest Gabonese football player right now, but with the current ordeal he’s facing at the Emirates stadium he may not come to the party when the competition commences.

However, there’s one player who has always stand in for their starman and is name his Bouanga. This season in the Ligue 1 the 27 year old has been one of the few bright lights for the struggling St Etienne.

Aside from Aubameyang for Gabon, Bouanga is one player the fans should be on the look out for once the competition starts proper.

Nanu has been enjoying a lot of playing for his Portuguese club FC Porto this season, however the AFCON has come at perfect time for him to once again shown his coach what is missing.

The flying fullback has been so good for Guinea-Bissau especially during the Cup of Nations and World Cup qualifiers last year, where he clearly shown his the country best player.

With the competition set to start in few days, Nanu would definitely be the player fans wants to see for his incredible pace and eyes for goal when attacking.