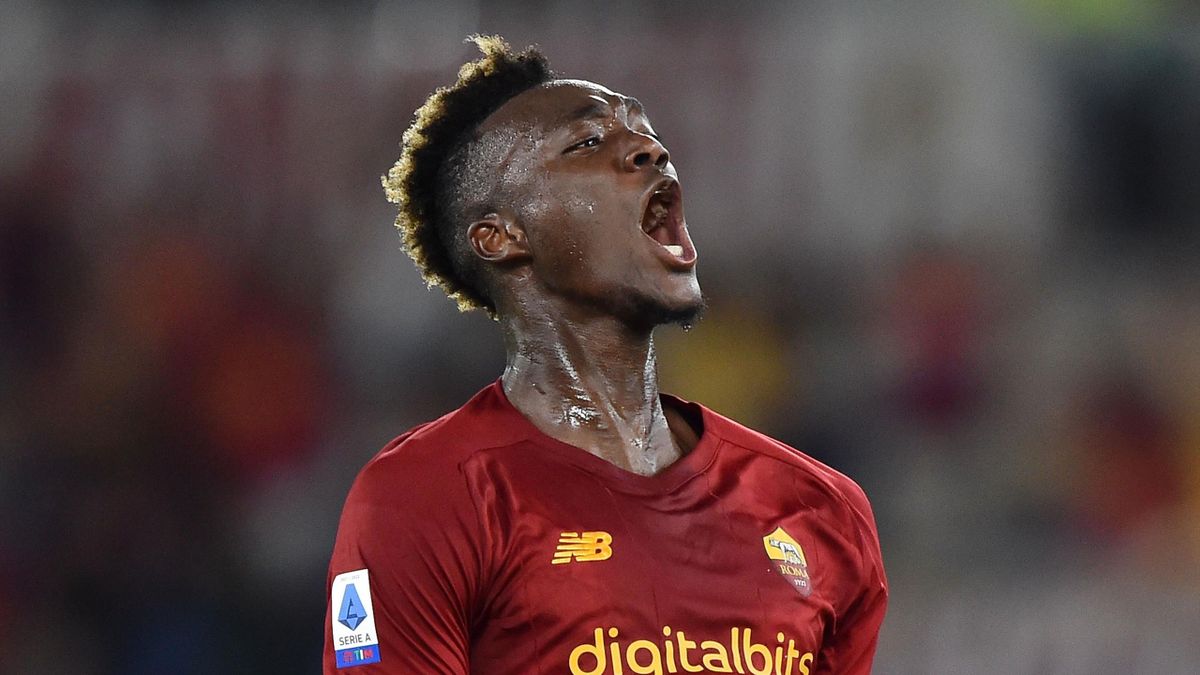 Kevin Oghenetega Tamaraebi Bukumo Abraham, Popularly known as Tammy Abraham is a striker who plays for Serie A club Roma.

He was born on the 2nd of October 1997 to Mr. and Mrs. Tamaraebi Bukumo in Camberwell, United Kingdom.

Tammy Abraham is considered one of the significant youngsters globally and has consistently proven to be a top striker in Italy.

However, while England International is well known for his success as a footballer and his future potential as a World-class striker, his early childhood is just as fascinating.

This Short Career Bio will take a walk into his childhood and essential parts of his football career.

Mr. and Mrs. Tamaraebi Bukumo have another son Timmy Abraham, Tammy’s younger brother and a footballer playing for Newport County.

He left Nigeria for the UK in a bid to secure greener pastures for himself and his family.

Mr. Tamaraebi is the one in charge of managing his son’s football career to date.

Tammy’s mother, Mrs. Tamaraebi, is a British citizen who met Mr. Tamaraebi in the UK. They both fell in love and eventually got married.

Tammy was in love with acting as a young boy, and he was given some acting roles to play in school.

He spoke about how he played the role of a bully to a smaller boy because of his bigger body stature, and the footballer testified that he enjoyed the acting drama.

Tammy, however, opted for football as he seemed to enjoy playing a little bit than acting.

He started his football career with the Chelsea under eight team and gradually progressed through the ranks in the Academy.

Roman Abramovich loved Tammy Abraham with other youngsters like Dominic Solanke, who was in Chelsea’s youth team, and he usually finds out time to watch the boys play.

When he came to watch, them play ask the boys to take a picture with him.

Tammy picked Chelsea as his choice club over Arsenal due to Didier Drogba being his role model.

Tammy recounted his early encounter with Didier Drogba while cold and walking outside of Chelsea’s Academy.

Drogba saw him and gave him a ride in his car to the training ground.

At that time, Tammy was around nine years old, and he expected to see his teammates outside so they could notice that Drogba brought him to training, but to his surprise, he didn’t see any of them.

From the 2015/2016 season, Tammy was part of the youth team under Chelsea that recorded a lot of success.

In 2016, he scored eight goals in nine matches in the UEFA Youth League edition, making him the second-highest goal scorer.

In the FA Youth Cup of the same season, Tammy scored the goal that brought victory to Chelsea in a match against Manchester City.

This got the attention of Guus Hiddink, the interim manager in Chelsea, who asked Tammy to start training in preparation to join the senior team immediately.

To develop Tammy, Chelsea decided to give him some regular time by loaning him to championship sides such as Swansea and Bristol City.

Following his exploits with Bristol City, the Nigerian football federation became interested in getting the signature of the Chelsea youngster due to his paternal roots.

The NFF severally tried to urge Tammy to sign with the Super Eagles team and paid visits to the UK.

The president of the NFF, Amaju Pinnick, promised that he would convince Tammy to play for Nigeria instead of England.

In response to the attention he was receiving from the West African Country, Tammy stated that he was a Nigerian, and at the moment, he was focused on playing football in England, and whatever was meant to happen will happen.

However, in September 2017, Amaju Pinnick claimed that Tammy had decided to play for Nigeria.

Tammy took to social media to deny the claims stating that he was available only in England on the same day.

In 2017 when Tammy was still playing at Bristol City, he got involved in an accident that saw him get a summon because he didn’t have a license or insurance.

Before joining Swansea on loan, Chelsea increased Tammy’s wages to 50,000 pounds every week.

After this deal, Tammy bought his parents an expensive car to celebrate his signing with them, which he posted on social media.

Tammy eventually had his first time with Chelsea in 2019 under former Coach and a successful short spell, including scoring his first premier league hat trick.

He currently plays for Roma under Manager Jose Mourinho.

Tammy Abraham is in a committed relationship with Leah Monroe, a social media influencer and a model.

The couples do not hesitate to flaunt pictures of themselves on social media, indicating that they are very much in love.

Tammy Abraham loves to flaunt his assets online, especially his cars. He has pictured several cars, including a BMW, a Ferrari 488, an Audi RS8, an Audi Q7, and a Range Rover.

It is difficult to tell if Tammy owns a house or how many homes he has in his possession. However, the fact is that he now lives in Italy in a rented apartment.

Salary, market value, and Net Worth

Tammy Abraham earns a yearly salary of 4,100,000 pounds in Roma. The England international currently commands a market value of 38 million Euros which is above average for his age.

Tammy Abraham is very successful and earns quite well for himself. Following his senior career between Chelsea F.C and Roma, he has been able to accumulate an estimated net worth of 8 million dollars.