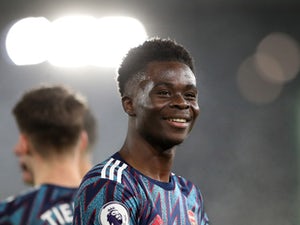 Arsenal are reportedly hoping to tie Bukayo Saka down to a new six-year deal until the summer of 2027.

The England international continues to thrive under the tutelage of Mikel Arteta and has registered four goals and four assists from 20 games in all tournaments this season.

Saka only penned a new deal with the club last year, with his current terms keeping him on until the end of the 2023-24 campaign.

However, journalist Ekrem Konur claims that Arsenal are now determined to tie the 20-year-old down for longer, with a deal until the 2027 on the table.

Such a contract would keep Saka at the club after his 25th birthday, with the attacker already boasting 15 goals and 25 assists in 108 games for his boyhood club.

The situation regarding Arsenal’s other attackers is unclear, though, with Arteta admitting that there is a “cloud” over his strikers’ futures.