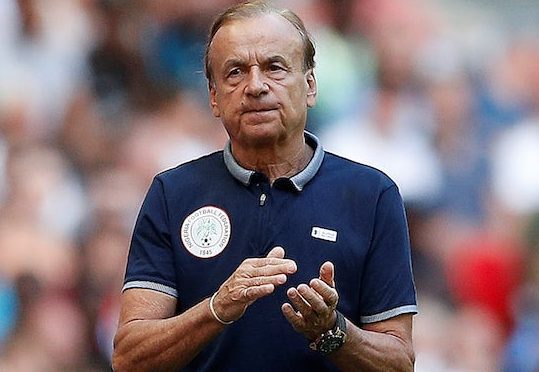 Former Governor of Abia State, Senator Orji Uzor Kalu, has urged the President of the Nigeria Football Federation (NFF) to relief the Super Eagles coach, Gernot Rohr of his duty.

Kalu disclosed this via his official Facebook page on Thursday.

He noted that the German tactician has not done enough to merit his position as manager of the senior national team going by how the team has been struggling to qualify for major competition.

“In the last five years, we have wasted our time in football. There is nothing new we are doing any longer. To see a country with many professional players home and abroad struggling to qualify for the Africa Cup of Nations and World Cup is heartbreaking. Gernot Rohr is not a good coach and I don’t understand why he is still managing Super Eagles.

“When I Was Governor, he applied to become employed as Enyimba coach. He was brought to Nigeria by Oscar Udoji but I refused to employ him. I am calling on the Chairman of NFF, Mr Amaju Pinnick to wake up and to quickly find a replacement for Rohr. We soccer lovers don’t need further dissatisfaction in a game, we have the capacity to make ourselves proud.

“If the problems you have this year are the same problems you had last year, then you are not a leader. You are rather a problem on your own that must be solved,” the Senator shared on Facebook.

Chelsea’s Edouard Mendy Blast The Media Over Use Of Picture