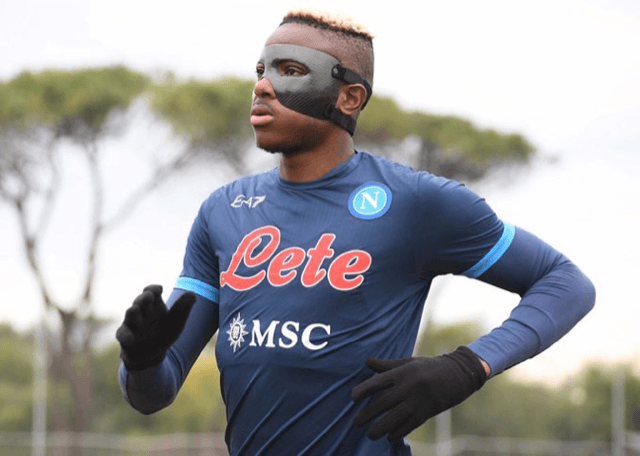 Super Eagles striker, Victor Osimhen’s hopes of featuring at the 2021 Africa Cup of Nations is in doubt after Napoli surgeon, Professor Gianpaolo Tartaro said he’s not fit enough to play at the competition.

Recall that Osimhen had been initially ruled out of the biggest African football showpiece, scheduled for January 9 to February 6, 2022, in Cameroon, after he suffered multiple fractures in his face following a clash with Inter defender Milan Skriniar on November 21.

According to Football Italia, Osimhen spent the Christmas break in Nigeria, but he’s expected to return to Naples on Friday for a medical check after a cheekbone surgery he underwent at the end of November.

However, Tartaro, the surgeon who operated on Osimhen in November, has revealed that the Nigerian international needs time to rest before playing football.

“For the formation of the callus bone, according to world protocols, it takes from sixty to ninety days. Unless a biological miracle,” the surgeon was quoted as saying.

“If he does not do the CT scan, we will not be able to dissolve the prognosis. Reduced fractures must consolidate: I repeat, for the formation of the callus, you have to wait two or three months unless a Christmas biological miracle: but biology is not a fan.”