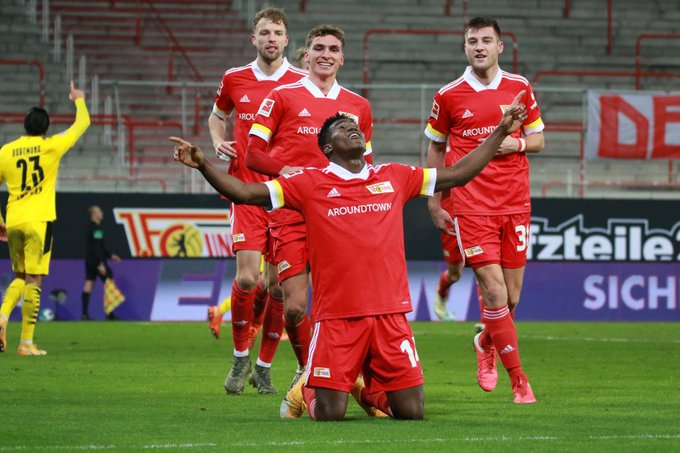 After an intense two weeks of international break, Nigerian players return to their respective clubs in Europe to continue the 2021-22 campaign.

Some of them were on target, some fired blank while some didn’t see action at the weekend. This morning let look at those who did brilliantly well for themselves at club level at the weekend.

Taiwo Awoniyi continue is impressive form this season with another goal to his name in the Berlin derby on Saturday against Herta Berlin scoring the first goal of the game.

Union Berlin went on to pick all three point in that game, as they consistently delivered a captivating performances that suggest they’re not in the Bundesliga to joke.

The lanky striker opened scoring for his team in the 15th minute to set the tone for the rest of the afternoon in the Sinobo Stadium.

Venezia picked an unexpected win away from home courtesy Nigeria international David Okereke, who was also instrumental in their last triumph before the international break.

The victory for Venezia dented Svanberg’s 100th appearance in Rossoblu jersey on the night.

Exciting Nigeria striker David Akinola scored the last of Adana Demirspor’s goals in their 3-1 triumph away to Altay on Sunday in Turkey.

The 25 year old’s goal is his second in five games since he joined the Demirspor in July, and he’s been churning out impressive performances for the Turkish side.

Inform Nigeria youngster Akinwunmi Amoo was also in his explosive element at the Stora Valla to his side Hammarby put four goals pass their host Degerfors.

Hammarby picked all three point against opponent with a 4-1 victory, which saw Amoo delivered yet again another captivating performance.

Ezekiel Henty scored one and assisted the other to helped Slovan Bratislava to a hard fought 2-1 win at Zimplin Michalovc.

The 28 year old continue his great form by scoring his ninth goal in 15 league games for the reigning champions.

Elsewhere, Super Eagles striker Terem Moffi continues his search for his first goal in Ligue 1 since September as he yet again fire blank in their loss to Lorient.

Moffi has only scored two goals in 13 appearances for Les Merlus this season, and he couldn’t help his side avoid defeat at the weekend.

Same in the Ligue 1, Samuel Kalu played the final eight minutes as Bordeaux shared the spoil away at Metz with a thrilling 3-3 draw.

In Russia Chidera Ejuke’s CSKA Moscow faced off with Brian Idowu’s Khimki at the VEB Arena, but the match didn’t produce any goal as the two Russian sides played out a stalemate.