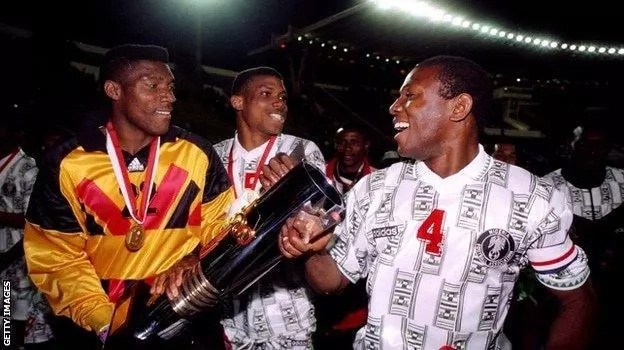 See Also: How To Join Midas Football Academy In Nigeria

Albania: (Kuqezijte) – “the Red and Blacks” (in Albanian)

Anguilla: (the Rainbow Warriors or “the Soccer Dolphins”)

Antigua and Barbuda: (the Wadadi Boyz) – Wadadi is a local dance

Argentina: (la Albiceleste) – “the White and Sky Blues” (in Spanish)

Australia: (the Socceroos) – a hybrid word from Soccer and Kangaroo (a native animal to Australia)

Bahamas: (the Rake and Scrape Boys) – named after a local dance

Barbados: (Bajan Pride) -Bajan is a popular team for citizens of Barbados

Bermuda: (the Gombey Warriors) -after a traditional dance

Bolivia: (La Verde) – La Verde means ‘The Green’ or to some ‘The Green Pasture’ because of one of the colours of the national flag.

Bosnia-Herzegovina: (Zmajevi) – Zmajevi means “The Dragons”. It is a popular nickname for all Bosnian sports players. In foreign media, the team is sometimes referred to as the Golden Lilies. Other names that have been used include BH Representacija – “the National Team” (in Bosnian), and Zuto-Plavi (“the Blue and Yellows” in Bosnian).

Botswana: Dipitse (“The Zebras”) – meaning “The Zebras” in the Tswana language

Brazil: (Canarinho, or Seleção) – Canarinho means ‘little canary’, and Seleção means The Selection/Team (in Portuguese). Other names that are sometimes used are Verde-Amarela (Green and Yellow) Pentacampeões (Five Time Champions), and Os Tupis – The “tupis” (a Brazilian indigenous group)

Brunei Darussalam: (Tebuan) -meaning “The Wasps” or “the Hornets” in Malay.

Bulgaria: (Lavovete) – “the Lions” in Bulgarian

Canada: (the Canucks) – Canucks is a slang term for Canadians. Also, Les Rouges, meaning ‘The Reds’

Central African Republic: (les Faons d’Ubangui) – “the Fwans of Ubangui”, a tributary of the Congo River, in French

Chad: (les Sao) – after the Sao civilization that once inhabited part of Chad

Comoros: (les Coelecantes) – “the Coelecanths” in French, a prehistoric fish once believed to be extinct but which has reappeared off the coast of Comoros

Congo DR: (Les Léopards / The Leopards) – Between 1960 and 1965, they were called the Lions. From 1965 till 1997 they were the Leopards, before reverting back to the Simbas (“the Lions” in Swahili) from 1997 till 2006. However this Swahili name was unpopular to non-Swahili speakers, so they again became the Leopards.

Cote d’Ivoire: (Les Éléphants) – The Elephants (in French), due to their part in the 19th century Ivory trade

Cyprus: (I Galanolefki) – “the White and Blues” in Greek

Ecuador: (la Tri or la Tricolor) – the Tricolor (in Spanish)

Estonia: (Sinisargid) – “the Blues” in Estonian

Finland: (Sinivalkoiset) – “the White and Blues” in Finnish

Germany: (Die Nationalmannschaft, or Die Nationalelf) – meaning ‘The National Team’, ‘The National Eleven’ (in German). Outside of Germany, simply ‘Die Mannschaft’ (The Team) is commonly used.

Ghana: (the Black Stars) – a reference to the sole black star on Ghana’s flag

Greece: (I Galanolefki) – translates as “the Sky Blue and White team” in Greek. They are also sometimes referred to as Ethniki Ellados (“the Greek Team” in Greek) and ”To Peiratikó” (“Pirates” in Greek) though the pirates is not an official nickname, it just came about after they won Euro 2004.

Guam: (Matao) – Matao refers to the people in the upper class of the ancient Guam society. Previously the team was known as “the Men in Blue and White”.

Guatemala: (el Equipo Chapin) – “Chapin” is Spanish slang for a citizen of Guatemala. also la Azul y Blanco (“the Blue and Whites” in Spanish) and la Bicolor (“the Bicolors”)

Guinea: (Syli Nationale) – the National Elephants. Syli is a word in Sousou, a Guinean language, which means Elephant.

Guinea-Bissau: (os Djurtus) – Creole for a species of fox

Haiti: (les Bicolores) – Les Bicolores means “the Bicolors” in French. There are also several other names that they are known by, including Les Grenadiers, Le Rouge et Bleu, La Sélection Nationale, l’Onze national (“the National Eleven” in French), Toup Pou Yo

Honduras: (Los Catrachos) – Catracho is Spanish slang for a citizen of Honduras, therefore meaning ‘the Hondurans’. Also la Bicolor (“the Bicolors” in Spanish)

Hungary: (Valogatott) – “the National Team” in Hungarian). Also the Magical Magyars (particularly in relation to the Hungary team of the 1950s)

India: (Blue Tigers) – The Indian National team are also sometimes referred to as the “Bhangra Boys” (Bhangra is a dance originating from the Punjab region)

Indonesia: (Merah Putih) – meaning “the Red and Whites”. Another nickname for the Indonesian Football Team is “Garuda” (see comments below)

Iraq: (Osod Al Rafideen) – “the Lions of the Two Rivers” in Arabic, also the Babylon Lions

Italy: (Azzurri) – Azzurri is the plural of Azurro (Blue), terefore Azurri means “The Blues”. The team is also sometimes referred to as la Nazionale (“the National Team”).

Kenya: (the Harambee Stars) – “Harambee” means “We will work together” in Swahili and is also the country’s motto.

South Korea (Korea Republic): (Asian Tigers or Taeguk Warriors) – also the Red Devils. The Taeguk symbol of two hands clasping is in the middle of the Korean flag.

Lebanon: (Al Aarz) – “the Team of Cedars” in Arabic

Lesotho: (the Likuena) – “the Crocodile” in Sesotho

Luxembourg: (D’Leiwen) – “the Lions” in Luxembourgish

Macau: (a Equipa Verde) – “the Green Team” in Portuguese

Madagascar: (Bareas) – a species of zebu, which appears on the country’s coat of arms

Malawi: (the Flames) – the word “Malawi” itself means “flames” in Chichewa

Maldives: (Red Snappers) – The Red snapper is a type of fish abundant in the waters around the Maldives. The team has also been known as Guamee Team – “the National Team” in Dhivehi.

Mauritania: (les Mourabitounes) – after an ancient dynasty that ruled Mauritania

Moldova: (Selectionata) – “the Selection” in Moldovan

Mongolia: (Blue Wolves) – Blue Wolf is a symbol of Turkic and Mongolian people. Named after the Mongolian Blue Wolf legend. The team has also been known in the past as “Shegshee”, which means “the National Team” in Mongolian.

Mozambique: (the Mambas) – the most poisonous snake in Africa

New Caledonia: (les Cagous) – French for the kagu bird that is native to New Caledonia. Also known as Les Rouges et Gris (“the Red and Greys” in French).

New Zealand: (the All Whites)

Niger: (the Mena) – a species of antelope

Northern Mariana Islands: (Blue Ayuyus) – In the local Chamorro dialect, the “y” is pronounced like a “z.” So it is pronounced ah-zu-zus. An ayuyu is a large land crab that is prized as a delicacy. Both the men’s and women’s teams use this nickname.

Pakistan: (the Green and White Team)

Peru: (la Blanquirroja) – “the White and Reds” in Spanish

Philippines: (Azkals) – Derived from the word askal, meaning “the Stray Dogs” in Philipino. They are also known as the “Tri-Stars” (From the three stars on their flag).

Portugal: (Selecção das Quinas) – in Portuguese the word “QUINAS” is a 5 sided Polyhedron, representing the “Forts” (Castles) Conquered from the Moors, in the “Foundation” of Portugal in 1143.

Republic of Ireland: (the Boys in Green)

Russia: (Sbornaya) – The nickname Sbornaya for Russia is foreign. In Russian, it’s not a nickname but just a noun (originally an adjective) meaning ‘national team’ or ‘selected team’, i.e. the word is applied to any national/selected team in any sport.

Rwanda: (Amavubi) – “the Wasps” in Kinyarwanda

Samoa: (Manumea) – after a native bird

San Marino: (la Serenissima) – “the Most Serene” in Italian

Scotland: (The Tartan Terriers) – the “Tartan Army” is also used, particularly in reference to Scotland’s fans

Slovakia: (Repre) – In Slovakia, the team is typically referred to as the Repre (Representation) or Národný tím (National team). However, in foreign media, they are often incorrectly described as Bojovní Jondovci (The Fighting Jondas).

Slovenia: (Fantje) – Meaning ‘the boys’.However, the team’s Wikipedia page says that Slovenia does not have a nickname. They are sometimes incorrectly called The (Green) Dragons, a symbol of the Slovenian capital Ljubljana. There are also some references that the Slovenian team nickname is Reprezentanca, meaning “the Representatives” in Slovenian.

Solomon Islands: (the Bonitos) – after a species of fish similar to tuna

South Africa: (Bafana Bafana) – the boys, the boys in isiZulu.The name was coined by journalist Sibusiso Mseleku in 1992

St Vincent and the Grenadines: (the Vincy Heat)

Suriname: (Natio) – Natio stands for the abbreviation of national, and national refers to the national team. Other names that are used are A-Selektie, which means “the A Selection” in Dutch, and Suriboys.

Swaziland: (Sihlangu Semnikati) – “the Shield of His Majesty” in Swaz

Sweden: (Blågult) – the Blue and Yellows (in Swedish). Also Kronos (“the Crowns” in Swedish).

Tahiti: (Toa Aito) – in Tahitian means “The Iron Warriors”. In French, it is Les guerriers de fer. It was previously believed to be “L’Equipe du Fenua”, the Island team – “fenua” means “island” in Tahitian.

Tanzania: (the Taifa Stars) – “Taifa” is Swahili for country. Also known as the Kilimanjaro Stars

Togo: (les Eperviers) – the hawks or Sparrowhawks (in French)

Turks and Caicos Islands: (TCI Team) – may be also “the Ripsaw Boys”

Uganda: (the Cranes) – the bird which appears on their crest

US Virgin Islands: (The Dashing Eagle) – The Dashing Eagle is the American symbol of power and grace, transformed to embody the unique optimism, flair, and self-determination of the islands.

USA: (The Stars and Stripes) – Other names that are used are Team USA and The Yanks. There does not appear to be an official name.

Vanuatu: (the Men in Black and Gold)

Venezuela: (la Vinotinto) – meaning “the Burgundies” in Spanish – because of the burgundy colour of their shirts. They are also known by the names Los Llaneros (The Plainsmen) and La Remolacha Mecanica (The Clockwork Beet).

Vietnam: (Doituyen Qocdia) – “the National Team” in Vietnamese. Other names used are (The Red Warriors) and (The Golden Star).

Zambia: (Chipolopolo) – The Copper Bullets (in Bemba). The word comes from the copper mines in Kitwe. The team was formerly known as the KK 11, after the founding president Kenneth Kaunda, but changed the nickname in 1993.

You must have noticed that some national teams and their nicknames are weird. Some others are cool though. Also, some teams use more than one nickname. If you believe I missed anyone of them, let us know in the comment box.

All Trophies Won By Carlo Ancelotti

How To Join Midas Football Academy In Nigeria