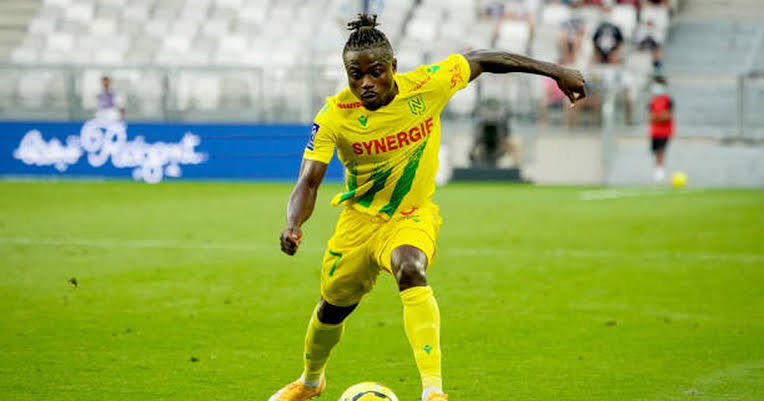 Super Eagles winger, Moses Simon, was instrumental in Nantes’ 3-1 defeat of Paris Saint-German on Saturday after providing as assist for the Canaries’ opener.

Simon who scored a sublime free-kick last weekend to give Nantes a vital win, continued in his stellar form and gave the his side a fledgling start against the Les Parisens.

The Nigerian international put up a terrific run down the left to to assist Randal Kolo Muani’s goal in the fourth minute to set the tone for a historic night in Nantes.

Mauricio Pochettino’s PSG side conceded two more goals in succession before half time courtesy of Quertin Merlin and Ludovic Blas from the spot.

Neymar pulled one back just after the resumption of the second half when he was set up by Lionel Messi.

The Brazillian would later miss from the penalty spot after Kylian Mbappe was hacked down in the box to close off any opportunity of a comeback from table-toppers as they slumped to their second loss of the season.

The victory for Nantes on Saturday is a very crucial one, as it ruined Lionel Messi’s 800th club football appearance party.

For Moses, the Nigerian winger now has eight assists in the season as the club record a back to back victory to move up on the table to 5th position.

What could make Pochettino leave PSG before end of season revealed