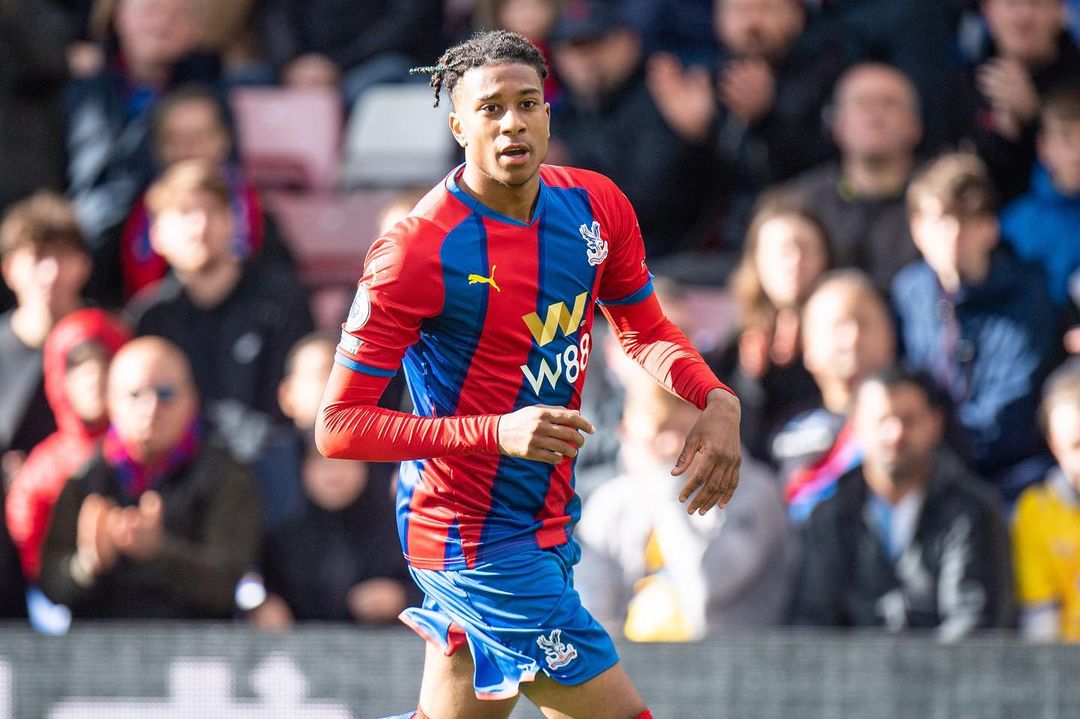 Michael Akpovie Olise is a footballer who currently plays with Crystal Palace. He was born to the family of Mr. and Mrs. Olise in Hammersmith, England, on the 12th of December 2001.

Michael is a rising footballer whose signing with Palace is expected to be pivotal in pushing his career to the grandest stage.

The energetic midfielder has stated that he is brimming with confidence and is expecting to have the chance to show the world what he can offer.

On the international stage, Michael is not yet a Nigerian international, but this status is expected to change sooner than later as he is willing to represent the Super Eagles and help as best as he can.

This Michael Olise biography will be exploring the life of the Super Eagles’ bound star, how he has been able to build his way to the top, and his future prospect.

Mr. Olise is from Southern Nigeria, while Mrs. Olise originates from French and Algerian descent.

Michael also has a brother Richard Olise who plays in Chelsea Youth Academy and the England youth team.

With the surname Olise, many people have linked Michael to the former Nigerian footballer Sunday Olise, but they only have a similar surname and are not family-related.

He joined “we make footballers” and played with Islewothians, their partner club, for two seasons before he joined the u9- u14 level of the Chelsea academy.

Olise got into Reading’s academy scholarship program in 2018 and played with the club for the first time in March 2019 in a match against Leeds United, where his club was defeated.

Michael later signed a three-year deal with readings in July 2019.

In September 2020, Michael scored his first goal in Reading which was the match’s second goal that gave his club victory over Barnsley.

And in April 2021. Michael was nominated as the EFL young player of the season.

He signed a five-year contract with Crystal Palace on the 8th of July 2021. He is yet to fully find his way into the first 11 of the team, but that is a feat that the future star has claimed to relish.

His five-year contract has an £8.37 million release clause which any club hoping to buy the midfielder in the future must meet.

Michael is eligible to represent England, France, Germany, and Nigeria due to his ancestral ties and his place of birth.

He was born in England, and this automatically makes him eligible to represent the three lions if he ever chooses to.

However, the palace midfielder has never expressed interest in capping for England.

Michael’s mom is of France/Algerian origin, and he could also play for France if he chooses to. He has already had a taste of France, and when he was called up in 2019 to represent his mother nation.

He was selected as a squad member forthe 2019 Toulon tournament with the under-18 team, and he made a number of appearances.

In June 2019, he played with the France shirt for the first time in a match against Qatar with the under-23 team.

However, he has never represented France at senior level and his recent choice proves that he may not.

Talking about his recent choice, Michael was one of the footballers on standby with the Nigerian team in the Africa Cup of Nations qualifiers match against Lesotho and Benin in 2021.

With his father being a Nigerian, the midfielder almost had a chance to pledge has allegiance with the Super Eagles after honouring a call up by Gernot Rohr.

He is yet to play for the Super Eagles though and anything could still happen.

We do not know if Michael is in a relationship at the moment because the footballer has never posted any pictures of himself and a girl.

He could be in a relationship and is doing a good job keeping away the girl from the public.

However, as much as is known, the Nigerian international is single and focused on developing his football career.

Just like his relationship status, Michael seems to keep everything about himself private and it is difficult to tell if he has a car.

There are not a lot of pictures of him online when he is off the pitch and he has never been pictured with a car before.

He has also not been seen around any house so it is difficult to tell if he has a house or notas there are no pictures to suggest it.

However, the footballer is still very young, and his football career just kicked off, so even if he doesn’t have all that he wants presently there is no doubt that he will eventually get it with time with focus and determination.

Olise earns a yearly salary of 550,000 pounds in Crystal Palace and this is projected to increase with time as he continues to grow and possibly get a contract extension.

Michael’s style of play is positive and if he continues in this vein, he is more likely than not to excel.

This will not only increase his yearly wages but also his football career in all respect.

Michael midfield performance improved significantly with his time in Reading F.C. and while he may still be settling into his new team, his class is expected to make him a standout performer in Crystal Palace.

Michael is not exactly the wealthiest when it comes to Nigeria footballers playing in Europe but the energetic midfielder has also been able to carve his own path in claiming some of the market that football offers financially.

With a career that has crossed through Reading to Crystal Palace, Michael has been able to accumulate a total of 1.5 million dollars.

Fortunately, his journey with Crystal Palace just and with age and other football factors on his side, the Nigerian is expected to excel quite well and increase his networth.