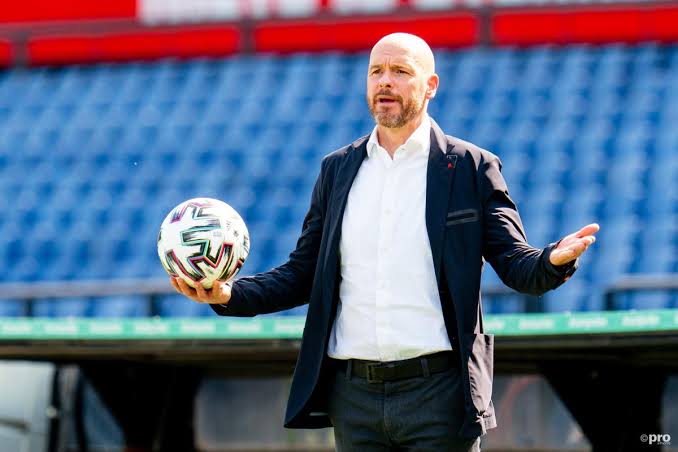 Ajax boss Erik Ten Hag has been revealed as the alternative target for Manchester United if their number one candidate Pochettino, does not become their new manager next summer.

The Argentine his said to be the favorite to take over from interim boss Rangnick in June, providing Pochettino can cut his contract with Paris Saint Germain.

While Pochettino is reportedly been linked to United, Paris Saint Germain sporting director Leonardo has come out to debunk the rumors that the Argentine his not told to leave.

However, according to Sportsmail United will turn to Ajax’s coach Ten Hag if the club fails to lure Pochettino down to Manchester United in the summer.

The Dutchman is said to be interested in the Red Devils job and Ajax are reportedly not standing in his way, if he wants to leave at the end of the season despite been under contract until 2023.

Both United and Ajax do have a good relationship with Donny Van de Beek’s £40 million move to Old Trafford from the Dutch giant.

Ten Hag is regarded as one of the most progressive gaffer in world football who could launch United into that era the fans enjoyed under Sir Alex Ferguson, however nothing is confirmed yet the Old Trafford side needs to wait till the summer to know if it’s Ten Hag or Pochettino.

Former United’s goalkeeper and Ajax chief executive Edwin van der Sar will play a key role in the future move of Ten Hag to United if the deal will eventually happens.

Iheanacho, Ndidi, Others Must Raise Their Game Against Napoli In Naples – Rodgers