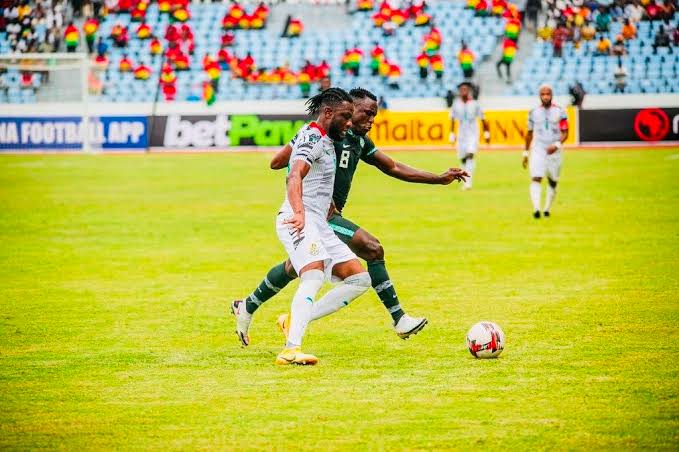 Nigeria lost to Ghana again in their famous rivalry, for a spot in next year’s African Championship in Algeria.

Ghana had the upper hand in the derby, defeating Nigeria 2-0 in the first leg.

A penalty from Daniel Barnieh and a late goal from Seidu Suraj sent the Super Eagles back to Nigeria, needing three goals without reply in the second leg.

The Coach Yusuf Salisu-led team started the NPFL’s highest goal scorer last season, Chijioke Akuneto and Ossy Martins up front with the duo of Babatunde Bello and Afeez Nosiru at the heart of the midfield.

The flanks had Joseph Onoja and Adamu Abubakar while the four-man defence had the captain Tope Olusesi, Ebube Duru, Tosin Adegbite, and Sampson Gbadebo with Adewale Adeyinka installed as the goalkeeper.

The Nigerian side began well, with both midfielders Nosiru and Bello knitting together passes out to the flanks for Adamu and Onoja.

Nigeria had a chance to break the deadlock before the end of the first half after Joseph Onoja received a long-range pass from Bello, but the Rivers United player failed to get his shot on target.

Goalkeeper Adewale Adeyinka almost made a costly error after he fumbled a long-range shot and the rebound was pounced on by Ghana’s attacker, Barnieh, but quick reflexes from Adewale prevented a goal.

Five minutes into the start of the second half, the referee adjudged Tosin Adegbite to have handled a long-range shot from Seidu Suraj. The Beninoise referee pointed to the spot for a penalty.

Despite the protest from the Nigerian players, the decision stood and Adegbite was booked. Barnieh made no mistake from the spot, sending Adeyinka the wrong way to break the deadlock in the game.

The introduction of Nwobodo for Adamu, who was substituted because of injury, increased Nigeria’s offensive onslaught.

In the 62nd minute, Adewale was called to action again from another long-range cross from the left flank by Abagna and prevented Attuquaye from getting a simple finish.

Ghana almost doubled their lead following a precise pass from Dennis Kosa, who set up Barnieh, but Adegbite intercepted the ball off the leg of the striker.

Five minutes into added time, Abagna finally sealed the victory after he latched on to a cross from Seidu Suraj to beat Adewale at his near post.

The Kwara-born goalkeeper thought he had tipped the ball away from danger, but the ball fell kindly for Suraj to get a rebound and score Ghana’s second goal.

With Sunday’s result, Nigeria needs three goals without reply when they host the Black Galaxies in Abuja next week.