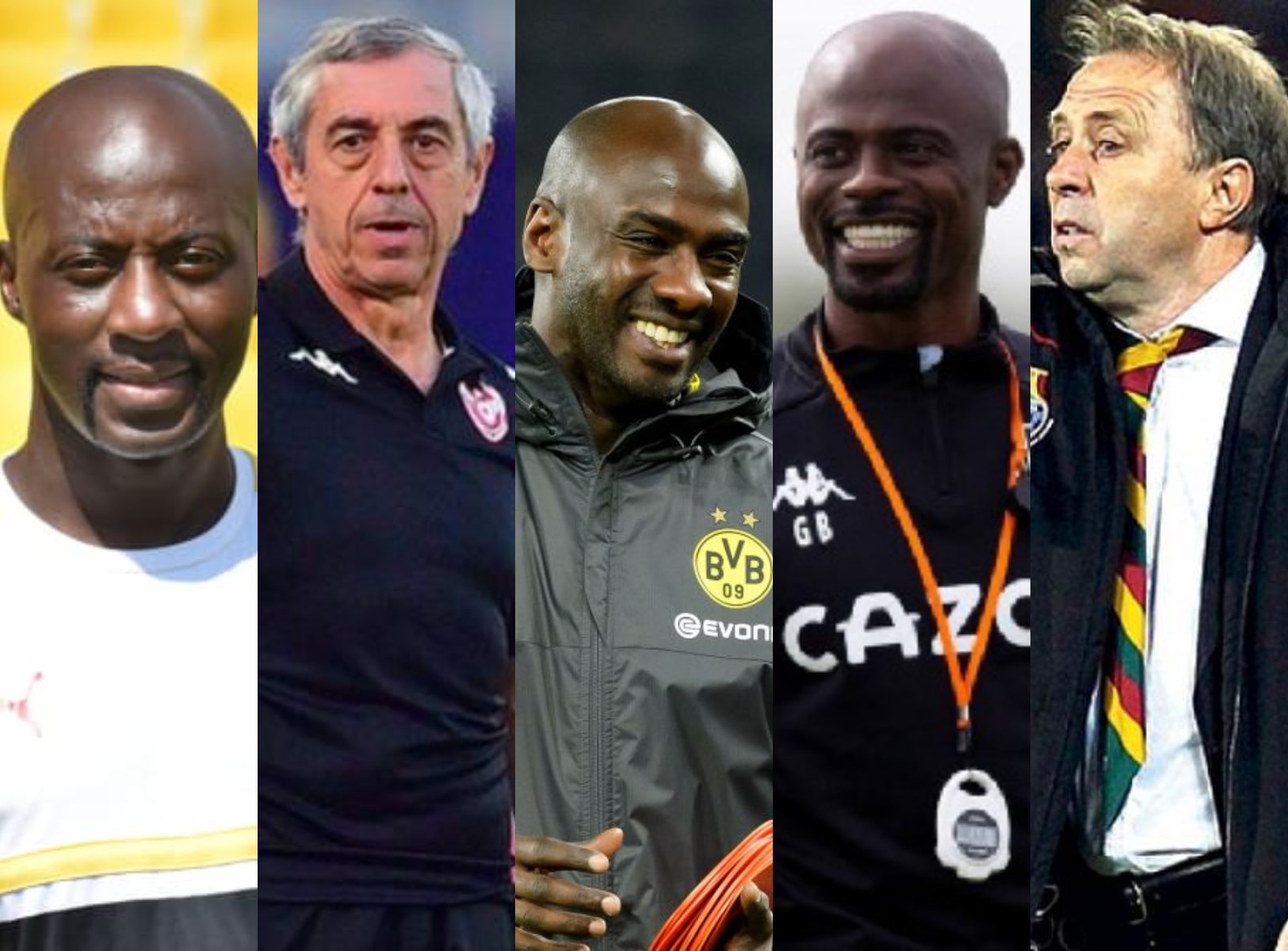 The Swedish football manager took over from George Ainsley and did his best for the Ghana national football team. He was however removed after three years in charge.

The Hungarian football manager coached the Super Eagles of Nigeria sometime in the sixties too, as well as the Chinese national team. Ember took charge of the Black Stars for only one year before he was axed. The other teams he managed are Gamma FC (1945–1946) and Újpest FC (1949–1950).

The Brazilian football manager had a very short stint with the Black Stars of Ghana. Aside Bora Milutinović, Parreira is the other coach that has led five national teams to the World Cup: Kuwait (1982), United Arab Emirates (1990), Brazil (1994 and 2006), Saudi Arabia (1998) and South Africa (2010).

The Brazillian’s stint with the Ghana national team was a short one, serving between 1977 and 1978 before being axed.

Osam Duodu Is one of the most successful coaches Ghana had, winning the 1978 AFCON, the 1993 African U-20 Cup of Nations and a silver medal at the 1993 FIFA World Youth Championship. He also coached Ghana’s Under-17 team, AKA the “Black Starlets”. Duodu died on 4 October 2016 at a hospital in Accra.

This was when Charles Kumi Gyamfi was appointed a second time by the Ghana Football Association to lead the Black Stars and it resulted in victory as he won the 1982 AFCON as I already mentioned above.

Apart from being Ghana’s national football team coach, he managed Hearts of Oak, Asante Kotoko and Ghana’s Women national team. He died in Suhum, Ghana at the age of 72 on November 9th 2016.

Some Ghanaian Premier League teams like Hasaacas, Asante Kotoko, Ashanti Gold, Hearts of Oak, Aduana Stars and Inter Allies are part of the teams Addo coached aside from the national team of Ghana. He also guided the Black Stars to win the WAFU Championship for national teams in 1986 and 1987. Addo died on the 24th of March 2017.

Gutendorf was a Guinness World Record holder for coaching 55 teams in 32 countries across five continents. Botswana, Tanzania, Sao Tome e Principe, Ghana, Mauritius, Zimbabwe and Rwanda are the seven African countries he managed before he died at the age of 93 on September 13, 2019.

This was the second time he was appointed Ghana national football team coach.

The German football manager did nothing special with the Ghana Soccer national team when he was in charge. He died at the age of 66 on 19 April 2010 in Ruppichteroth, Germany.

Burkina Faso, Senegal, Ivory Coast, DR Congo and Ghana are among the countries in Africa he managed. He won the JVC Fifa U17 Junior World Cup with Ghana in Italy and got the Black Stars to the finals of the 1992 AFCON in Senegal.

The Ghanaian coach and FIFA Instructor got the job of managing the country’s national team for the third time.

Edward Jeff Aggrey-Fynn was at the 1964 Summer Olympics where he competed in the men’s tournament. He died at the age of 71 in January 2005 in Cape Coast, Ghana.

The Danish football coach managed the Ghana national team, but with no major laurels. He died in Herfølge, Denmark at the age of 74 on February 7, 2020.

The Brazilian football manager was known for coaching mainly in Africa. He was the one who led Ghana’s Black Stars to the 1996 AFCON. He was later appointed manager of Angola in March 2002.

Popularly known as “Iron Rinus”, the Dutch football manager made little impact in his short sting as Ghana’s coach.

Osam Duodu came for the fourth time on this list of Ghana Black Stars coaches to serve as Ghana’s national football team coach.

Attuquayefio played for the Ghana national team severally and helped them win the 1965 AFCON before he went on to the Black Stars. He died from throat cancer on the 12th of May 2015 at the Korle Bu Teaching Hospital in Accra, Ghana’s capital.

Once again, Osam Duodu was drafted in to lead the Ghana national team.

Serbian football coach had a very short stint with the Blac Stars. Živadinović died at the age of 76 on 17 July 2021.

The Ghanaian football coach was called upon again to lead the Black Stars.

Ziese also came back a second time to manage the affairs of the Ghana national team.

The former German goalkeeper was made caretaker coach of the Black Stars of Ghana for about a year.

The Portuguese football manager took charge of the Black Stars and spent less than a year with the team. HE currently still coaches in Ghana with Asante Kotoko.

The Serbian football manager took over the helm of the Ghana squad and was tasked with qualifying the country for the Germany 2006 World Cup. He was successful and took Ghana to their first-ever FIFA World Cup appearance. He also qualified them for the 2006 AFCON in Egypt.

The Ghana Football Association brought in Le Roy in September 2006 as coach of the Black Stars and was able to get Ghana to their highest FIFA World Rankings position ever, putting them in 14th position.

Rajevac was the Black Stars’ coach in the 2010 World Cup when Ghana almost reached the semi-final, narrowly losing to Uruguay in the quarter-final via penalty shootout.

Stevanović was appointed as Ghana’s new head coach in January 2011 but was unable to achieve much for the team and so the Serbian football manager was sacked on 19 March 2012.

The left back was part of the 1982 squad that won the 1982 African Cup of Nations. He was part of the technical team of Fred Osam-Duodu between 2000 and 2001. He was also Ghana’s assistant coach under Claude Le Roy and Milovan Rajevac. It was in April 2012 Appiah finally became the Head coach of the Black Stars and emerge as the first black African coach to take Ghana to the World Cup in the 2014 World Cup in Brazil.

The Ghana Football Association (GFA) made Konadu succeed James Kwesi Appiah in a caretaker capacity, having left his position as Ghana manager by mutual consent in September 2014.

The Israeli professional football manager led the Black Stars to the final of the 2015 AFCON where they became runners up to Ivory Coast having been beaten on a penalty shoot-out.

Konadu was reappointed as caretaker manager of Ghana’s senior national team for the second time in March 2017.

After Konadu had stirred the ship of the national team in a caretaker capacity, Appiah was re-appointed in April 2017 as the coach of the Black Stars as a replacement to the former Chelsea manager Avram Grant. Appiah was however sacked in January 2020 when nothing much was seen in him anymore.

He served as deputy to James Kwesi Appiah before being appointed as the head coach of the Blac Stars on 15 January 2020. Following an unconvincing win against Ethiopia and defeat to South Africa in a World Cup qualifying match, along with his two assistants, David Duncan and Patrick Greveraars, Akonnor was sacked.

Rajevac was brought back to ‘hold the fort’ for the Black Stars for a second time in September 2021. After the exit of the Ghana national team at the AFCON 2021 tournament – which was played in 2022 – he was sacked in January 2022.

Lastly (at least for now) on this list of Ghana Black Stars coaches is Addo. He is the current head coach of Ghana in an interim capacity. He is to handle the Ghana Black Stars vs Nigeria 2022 Qatar FIFA World Cup final play-off match. As Ghana’s new coach, only time will tell for how long.

Those are all the 33 different past coaches and three caretakers on this list of Ghana Black Stars coaches. C. K. Gyamfi remains the most successful Black Stars coach. And as time goes on, it is expected that more coaches will be hired to manage the team. An update will surely be made on this post to reflect the latest Ghana manager.