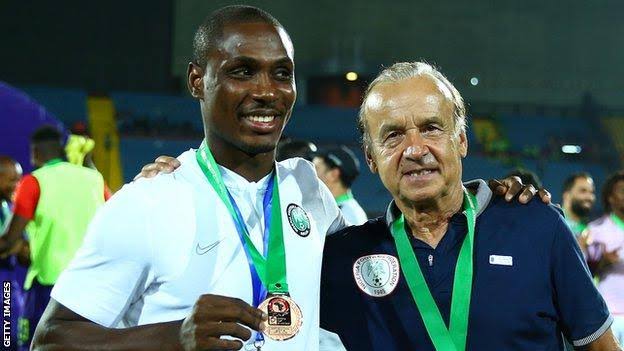 As the clock continues to countdown to Super Eagles’ World Cup qualifying tie against Liberia on Saturday, head coach of the Super Eagles, Gernot Rohr, has explained the exact reasons behind calling Odion Ighalo out of retirement, and back to the national team.

The 32-year old forward was a surprise inclusion in Gernot Rohr’s squad list for the clash against Liberia and Cape Verde, having retired from international football in July 2019 shortly after the AFCON in Egypt, where he emerged the tournament’s top scorer.

Speaking at Thursday’s pre-match press conference, Rohr said: “Ighalo wanted to retire after the AFCON. He changed his club and he also wanted to spend time with his family but now the motivation is there for him to come back to help us.

“He’s experienced, we have a very young team. Ighalo has goalscoring qualities, his experience and professionalism can help the young players especially in the attack to be more efficient, and we are all very happy about this.”

Ighalo has proved pivotal for his Saudi Arabian side, Al-Shabab FC, scoring nine in eleven outings this season in the Saudi top-flight.