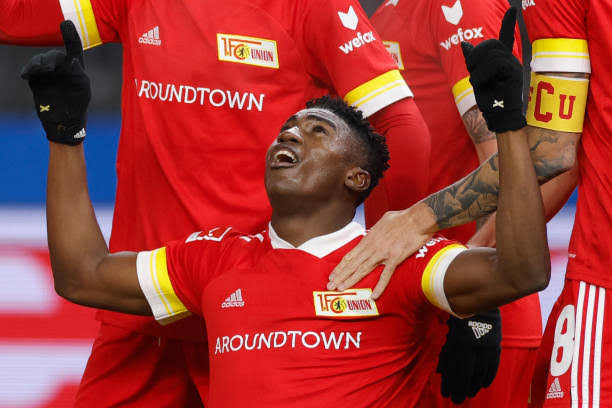 Nigerian international, Taiwo Awoniyi, found the back of the net in Union Berlin’s 2-1 triumph against a hapless RB Leipzig side on Friday.

Awoniyi has now netted nine league goals in fourteen league outings for The Iron Ones this season and fourteen goals in twenty-three across all competitions.

Union Berlin edged out RB Leipzig to continue their impressive run at the Stadion An der Alten Försterei, which has seen The Iron Ones taste defeat in just one of their previous 24 Bundesliga home games.

The hosts got off to a dream start, when Taiwo Awoniyi poked home a cross from Timo Baumgartl as early as the sixth minute.

Baumgarti then got the winner in the 57th minute which saw Union Berlin return to winning ways, after losing to Frankfurt in their last league fixture.

Urs Fischer’s boys will have a date with bottom placed Greuther Furth next weekend.