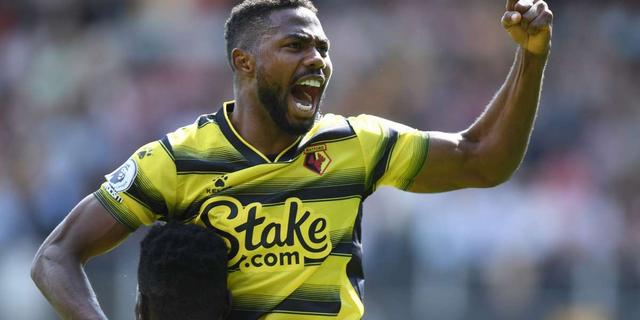 Emmanuel Dennis’s stoppage time goal helped Watford seal a comprehensive battering of a sorry Manchester United side at the Vicarage Road on Saturday.

The Hornets couldn’t have asked for a better start to the game as they completely dominated proceedings right from the get go.

The hosts played with an intense approach and Ismaila Sarr could’ve put Watford ahead as early as the seventh minute following a penalty from Scott McTominay, but David De Gea saved the shot and Kiko Femenia scored on the rebound.

VAR ordered the penalty to be replayed and Sarr stepped up once again, and the Spanish goalkeeper saved it for the second time.

Josh King got Watford’s first goal in the twenty-eight minute with a close range effort following a low cross from Nigerian forward, Dennis.

Shortly before the break, Sarr redeemed himself having lost a double penalty earlier on and doubled the Hornets’ lead, sending the fans into a frenzy before half time.

The visitors invited Anthony Martial and Donny van de Beek in the second half and the move paid dividends soon enough.

The Ditch midfielder pulled one back for United after just five minutes into the second half following a headed assist from Cristiano Ronaldo.

Watford didn’t give up on their attacking intent, and found a way to add a third goal when João Pedro placed a shot under David De Gea’s legs on stoppage time, again, the assist came from Emmanuel Dennis.

Watford’s fourth goal would come when Dennis turned the finisher deep into injury time, and put the final nail in Solskjaer’s coffin as his tenure at Old Trafford hangs by a thread.