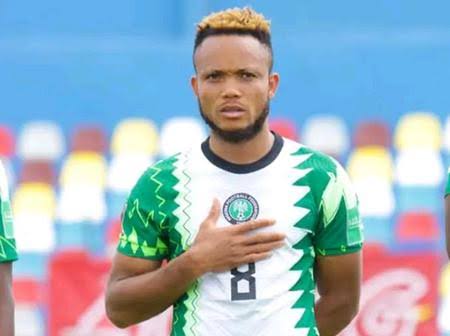 CSKA Moscow winger Chidera Ejuke has reported for international duty in Abuja ahead of the biennial Africa Cup of Nations billed for January in Cameroon.

With his arrival in the Eagles camp the number of players around now has doubled in the last twenty four hours with the arrivals of Almeria forward Umar Sadiq and Kaizer Chiefs goalie Daniel Akpeyi.

The pausing of Russian Premier League and DSTV Premiership pave the way for Ejuke and Akpeyi to link up with the national team a day after opening camp.

The Super Eagles will start their first match at the AFCON against Egypt on January 11, before facing Sudan on January 15 and Guinea-Bissau for days later.

The Nigerian fans would hope Eagles start their campaign on a good note with a win against Egypt, before facing Sudan and Guinea-Bissau who shouldn’t pose any threat to the team.