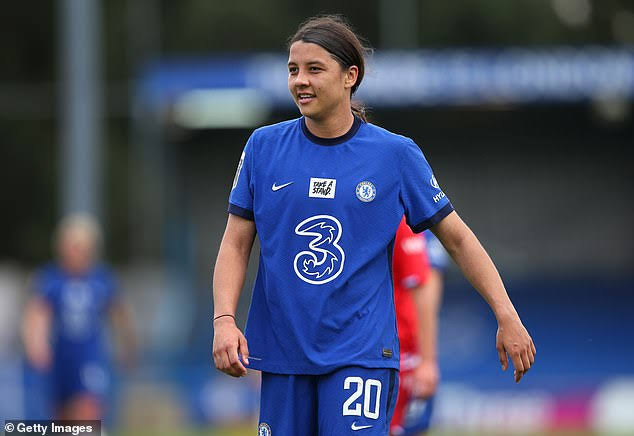 Australia and Chelsea forward Sam Kerr, has signed a new contract with the Blues that will commit her to the club untill 2024.

Kerr has been an integral member of the Blues Women’s team since joining during the 2019 season, scoring 39 goals in 47 appearances and winning the 2020-21 Barclays Women’s Super League Golden Boot having scored 21 goals in 22 matches.

After extending her contract for another two years, the Australian said: “It’s really exciting. I’m really happy at the club. We’ve had good success, been at a club like Chelsea is an amazing opportunity.”

“The time was just right, I feel really comfortable been here. I think the club gives me every opportunity to succeed as a player.”

“I can’t see myself going anywhere else in the world or leaving Europe, having what I have at Chelsea.”

“The time was right, honestly, I didn’t feel like I wanted to rush into anything, just like signing here the first time, it just happened naturally.”

Following Kerr’s extension, the General Manger of the team Paul Green, made his intention known on how delighted they’re at the club.

“We are absolutely delighted that Sam has extended her deal with the club, she’s quite one of the world’s best strikers and goal scorers.”

“We look forward to continuing building on our recent successes, and Sam will play a big role in achieving those targets in the future.”

Cameroon vs. Ivory Coast; Who among the two sides deserve a play-off spot in Africa?