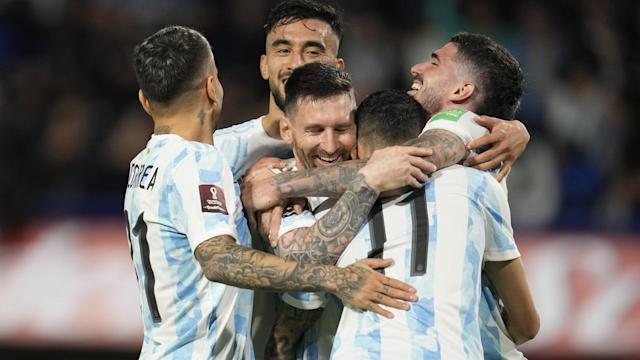 Argentina scored twice in three minutes late in the second half to help cement their win over Venezuela.

Goals from Nicolás González, Angel di Maria and Lionel Messi were enough for Argentina, who have already booked a spot in this years world cup, to beat a side languishing at the bottom of the qualifying table.

Venezuela managed to repel Argentina until 10 minutes before half-time when Nicolas Gonzalez knocked home Rodrigo De Paul’s inviting low cross from six meters out to give his side a deserved lead.

De Paul orchestrated Argentina’s second goal as well. He played a through ball to substitute Angel Di Maria who scored a lovely goal in 79th minute after chipping the ball over three Venezuelan defenders from outside the box.

Lionel Messi became the fastest player to 760 career goals when he added his team’s third goal three minutes later after chesting down a Di Maria pass before scuffing the ball past a stranded Wuilker Farinez to ensure Argentina beat Venezuela.

This was Venezuela’s 10th defeat in their last 12 games and extended Argentina’s unbeaten run to 30 matches dating back to July 2019.

The home side, were without four players suspended for breaching COVID-19 quarantine rules ahead of September’s suspended game against Brazil, have never lost to Venezuela in eight home qualifiers.

The two-time world champion and current Copa America winners will be joined in Qatar by Brazil, Ecuador and Uruguay, while Peru, Colombia and Chile are battling for fifth place and a playoff spot against a team from the Asian confederation.

The final round of games will take place coming Tuesday.