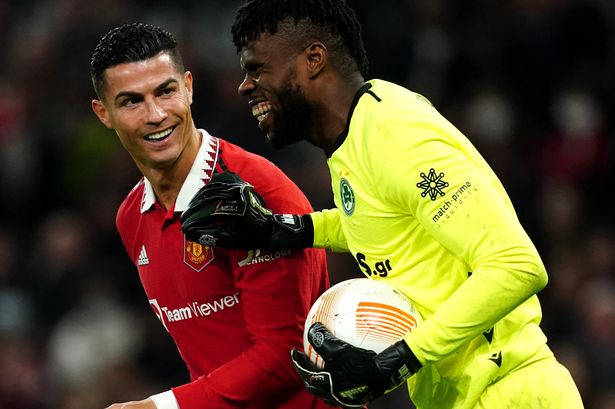 The iconic No.7 came into the contest with his tail up, after netting his 700th career goal in United’s 2-1 away victory over Everton.

Ronaldo became the first player in football history to reach that elusive figure in their career.

However, Ronaldo appeared to be a man on another goalscoring mission during Erik ten Hag’s side’s narrow 1-0 victory over Omonoia.

And he would’ve had one or two more were it not for the Uzoho’s performance.

The Nigerian international produced one of the best goalkeeping performances at Old Trafford for many years, denying United with save after save.

He made multiple saves from Marcus Rashford, including a miraculous double save from the Engishman and Antony, while he also got a finger tip onto a powerful drive from Casemiro, nudging the Brazilian’s effort onto the crossbar.

But the 23-year-old shot-stopper’s best stops may have come from the double save he produced against Fred and Ronaldo.

After saving the initial effort from the Brazilian, Uzoho was up like a shot to smother a follow up from the former Real Madrid and Juventus ace.

His lightning reactions prevented the Portugal captain from taking his goal tally to 711.

And Ronaldo enjoyed a light joke with the shot-stopper after his brilliant goalkeeping.

Unfortunately for the Cypriots, he was not able to secure the clean sheet, as Scott McTominay struck in the dying stages of the contest to steal the points for the Reds.

However, there was only one name on the lips of everybody.

“Very proud of the team. The man to the left of me (Uzoho) was outstanding,” former Celtic manager and current Omonoia manager Neil Lennon said about his goalkeeper. “He was inspiring. When you play a team of this calibre you need your goalkeeper to play well and he was world-class.

“I was so happy for him. We were a few minutes away from one of the greatest results in this club’s history.”