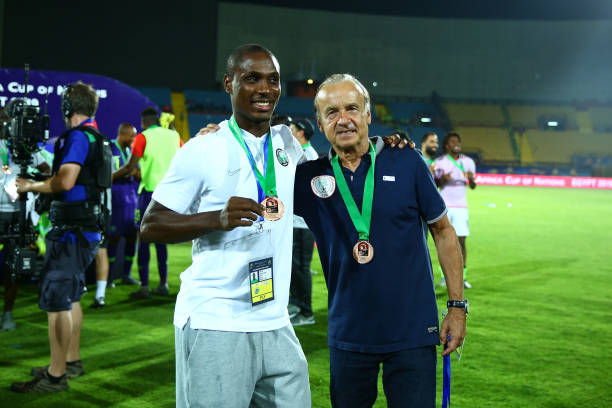 Top-flight leagues football would be on hold as we edge closer to another two weeks of international break for 2022 World Cup qualifying games.

As the Super Eagles of Nigeria prep up for their double header games against Liberia and Cape Verde slated for Tangier in Morocco on the 13 of November and three days later in Lagos at the Teslim Balogun Stadium, team boss Gernot Rohr named a controversial 21-man squad dropping Awoniyi.

The Union Berlin forward, Awoniyi has consistently prove himself as the go to man for Die Eisernen this season, having scored seven goals in all competition both in the Bundesliga and Europe.

The 21-man selection release by the German tactician has raised a lots of eyebrows among football loving Nigeria fans, questioning the decision to invite the Qatari based forward Odion Ighalo back to the Eagles ford when we already have an array of attacking talents scattered across Europe.

While we’ve also seen other managers in football convinced a retired player to come out of retirement, there is no right justification in Rohr’s and Nigeria Football Federation (NFF) decision to extend an invite to Ighalo when we already have a whole lot of young and talented forwards.

Rohr in his statement while talking to the press, revealed his decision to recall the Al-Shaab forward is down to his experience. While convincing retired player to come out of retirement isn’t an unusual case, but the presence of Ighalo in the team could disrupt the mood and cohesion in the camp.

With the jury still out on Rohr’s decision in dropping an inform Awoniyi playing top-flight football week in, week out in the Bundesliga for an Ighalo who ply his trade in Qatar might kill the momentum in the camp.

However, it would be interesting to see how the German gaffer manages the team without tempering with the supposed stability his building in the team with the presence of Ighalo.

Shehu Abdullahi speaks on Ighalo’s return to the Super Eagles