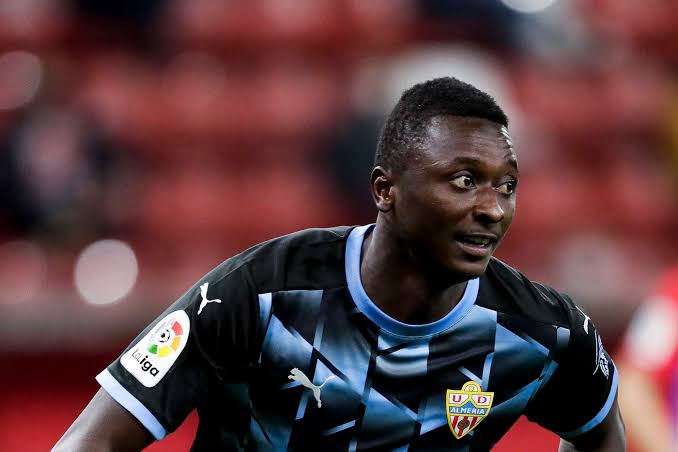 Sevilla have began the transfer process of signing Nigerian striker, Sadiq Umar ahead of the 2022-2023 season.

The Rojiblancos have identified the UD Almeria forward as a key transfer target as preparations for next season has been kick-started by the Seville club, and have entered the race to sign Umar who has also been linked with Barcelona.

The Super Eagles striker joined the Almeria in October 2020 from Partizan Belgrade and has since become an integral part of the Spanish Segunda Division side.

Umar, was able to notch twenty goals in thirty-eight LaLiga Segunda Division outings with Almeria last season and hasn’t rested on his laurels.

The 25-year old netted ten goals in twenty-two appearances this season already, however, he could’ve netted more but for an AFCON participation with Nigeria in Cameroon which lasted for three weeks.

His impressive performance meanwhile, hasn’t gone unnoticed with Les Transfert as per Estadio Deportivo media reporting that the Seville club has transfer already.

“Second in the La Liga championship, the formation of FC Seville would already be looking at the next summer transfer window with in particular the arrival of a new striker,” the website wrote.

“According to information from the Estadio Deportivo media, a track has been activated in the Spanish second division.

“Indeed, the Andalusian club would be very interested in Umar Sadiq. Aged 25, the latter is currently playing under the colours of Almeria where he is linked until June 2025.”

“Estimated at 18m on the transfer market, the native of Kaduna has scored eleven goals this season and delivered eight assists in twenty four games.”