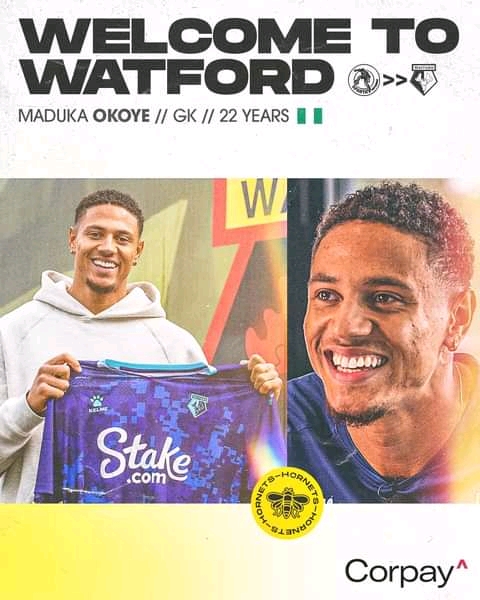 Okoye, 22, signed a  five -and-a-half year contract with the Hornets.

“Watford FC is pleased to announce that it has reached agreement to sign highly-rated young goalkeeper Maduka Okoye, on a five-and-a-half year deal that will begin on January 1, 2022,”reads a statement on the club’s website.

“The Nigeria international joins the Hornets for an undisclosed fee from Eredivisie outfit Sparta Rotterdam, to where he will return on loan until the end of the 2021/22 campaign.

“A regular starter for the Dutch club, Okoye has lined up between the sticks in each of their games so far this season, while he has made 13 appearances for his country since debuting in a 1-1 draw with Brazil in 2019.

“Born in Germany to a Nigerian father and German mother, the 22-year-old played in the youth ranks at Borussia Mönchengladbach, Bayer Leverkusen and Fortuna Düsseldorf before moving to Sparta Rotterdam in the summer of 2020. He won Sparta’s Player of the Season award last term for a string of stellar performances, helping his side claim an eighth-place finish in the league.”

“The 6ft 6in shot-stopper’s consistent displays for both club and country have seen him linked with some of Europe’s biggest clubs, but he has now put pen to paper on a long-term deal with the Golden Boys.”