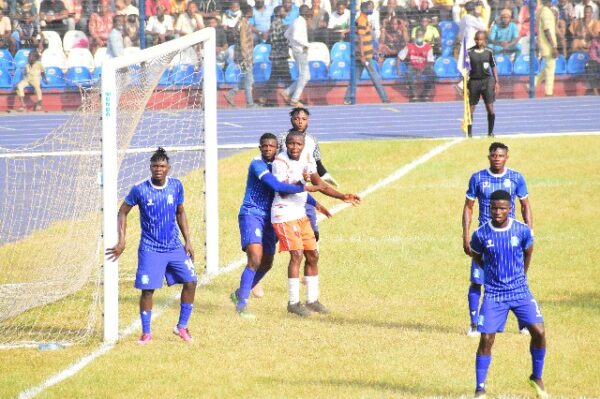 Enyimba continued their impressive for under new manager, Finidi George again on Sunday as they secured their second successive league win against Enugu Rangers to maintain a perfect start to the season.

Just as it happened last weekend against Abia Warriors, all that was needed for The People’s Elephants was another late strike from Chukwumeka Obioma to beat Enugu Rangers 1-nil at the Nnamdi Azikwe Stadium on Sunday.

The Flying Antelopes, at their adopted home ground, missed a host of chances and paid dearly for it with few minutes left to the final whistle.

Finidi George’s side made it two wins out of two league games this season; a fifth consecutive win under the 50-year-old and their first win at Rangers since 2015.

In Port Harcourt, the ‘Pride of Rivers’, Rivers United were truly at home as they overran Katsina United by 3-0.

Ishaq Rafiu stole the show in PH with a remarkable performance in front of the home support as Rivers United strolled past Katsina United 3-0.

The winger scored twice and turned provider for Chijioke Akuneto in the second half to hand Stanley Eguma’s side their first win of the season.

Abdullateef Abiola’s goal settled the scores as Wikki Tourists beat visiting Niger Tornadoes 1-0. After losing to Enyimba on matchday one, Abia Warriors redeemed themselves with a 1-0 victory over Sunshine Stars.

For MFM who lost at home 2-0 to Remo Stars on matchday 1, they recorded another 2-0 loss this Sunday at Dakkada following goals from Aniekan Ekpe Okon and Musa Bashiru.

Plateau United only needed a fifth minute goal by Muhammad Zulkiilu to beat Kwara United 1-0. Kano Pillars were forced to a goalless draw in their home match with Lobi Stars