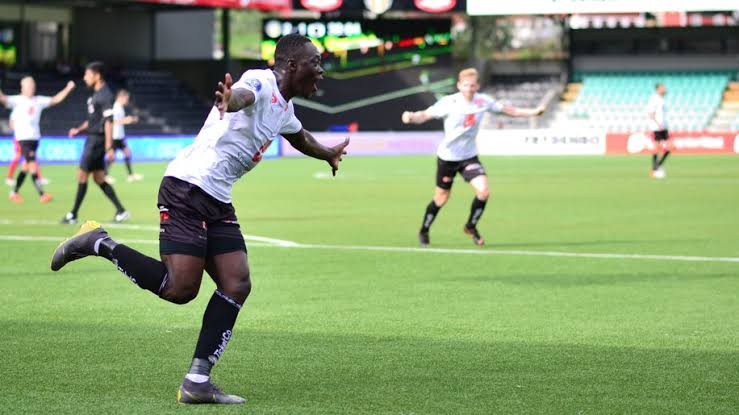 Nigeria’s former U20 forward, Akor Jerome Adams, has hit double figures of goals in the Norwegian OBOS-LIGAEN, after scoring his tenth goal of the season in his side’s heavy loss to KFUM Oslo on Saturday.

Prior to today, Akor and his Sogndal side hadn’t lost in three matches but their hope to make it three wins out of four was dashed by an Jørgen Isnes’ side

It was the Nigerian international’s goal that opened the floodgates as early as the twelfth minute after a crunchy start to the game.

Had the visitors not lost the concentration in the second half, they would’ve emerged winners but that wasn’t the case.

Jørgen Isnes’ pep talk for his side during the break changed the complexion of the game when the second half started and they got their equalizer after five the first minutes of the second half.

The home team Gambian import, Alagie Sanyang, completed the come back for his side at the 63rd minute before Bilal Njie 90th minute goal ensured the visitors returned back to base empty handed.

But it was a memorable afternoon for the Nigerian youngster who has now notched his tenth goal of this season, the first time he’ll do double figures since arriving at the club in 2018.