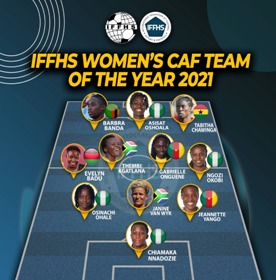 Super Falcons stars including Asisat Oshoala, Chiamaka Nnadozie, Osinachi Ohale and Ngozi Okobi have been named in the International Federation of Football History and Statistics (IFFHS) Women’s CAF Team of the Year 2021.

The giant of have Africa women’s football contributed a player in each position on the pitch with four players from the Super Falcons included in the ceremonial best XI of 2021.

The trio of Onome Ebi, Rita Chikwelu, and Rasheedat Ajibade are also among the seven substitutes in the team coached by Zambia’s Bruce Nwape.

Four of the Falcons stars included in the team deserved their place in the squad, with Asisat Oshoala winning a treble with Barcelona Feminine in the 2020-21 season.

While goalkeeper Nnadozie has been fantastic for Paris Saint Germain feminine with her recent five star performance keeping six clean sheets so far this season.

Osinachi Ohale has also carved out a brilliant reputation as a goalscoring defender with four goals to her name from 28 appearances in the Primera Division Feminine in 2021 including a memorable goal against Barcelona back in June.

Old war horse Ngozi Okobi also made the list having been a consistent player in the Swedish Damallsvenskan for two different clubs with over 100 appearances.

Three players who impressed in the Carabao Cup quarter-final match