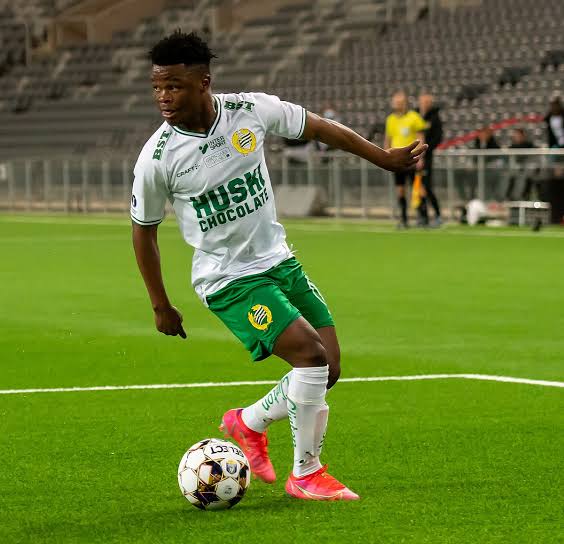 African players has over the years shown they can also stands toe-to-toe with top professional footballers both from the European and South American countries when it comes to ditching out mouthwatering performances.

With the 2021-22 campaign gradually gathering momentum across Europe, Nigeria players are also not left out of the actions as they consistently bang in the goals week in, week out for their respective clubs.

Let’s take a trip down to Serie A as we’ll be focusing on how Nigeria players fared in Europe last weekend. Starting with the Italian first division, newly promoted and Venice based side Venezia sprung up a surprise against Mourinho’s A.S Roma with a 3-2 victory at the Pier Luigi Penzo, stadium.

With sixteen minutes to the final whistle, Club Brugge loanee David Okereke broke the Giallorossi fans heart when he beat Rui Patricio with a simple finish after a long ball from Ethan Ampadu.

Elsewhere in the Dutch Eredivisie, Cyril Dessers was once again the hero on the night for Feyenoord, coming off the bench to score the only goal in the 92 minute that gave De Trots van Zuid all three point in their clash with AZ Alkmaar.

Dessers’ goal on the day didn’t only served as a great booster for the Rotterdam based side, it’s also came as a record for the Nigeria international following in the footsteps of Igor Korneev who was the last Feyenoord star to score at least four Eredivisie goals as a substitute in an entire campaign in 1998-99.

Alhassan Yusuf also registered a goal for his new side Royal Antwerp in the Belgian top-flight league against RSC Anderlecht.

‘The Great Old’ as their nickname suggest put two goals past Anderlecht, with the summer signing from Goteborg scoring his first goal for Royal in the 63rd minute.

In the Turkish first division, Emeka Eze scored an important goal for his side as they added more salt on the injury for Genclerbirligi with a 2-0 victory on the night.

Eze composed himself before slotting the ball into the bottom corner, with a through ball from his compatriot Ibrahim Olawoyin who was also very instrumental in Ankara Keciorengucu’s triumph.

Akinkunmi Amoo is currently one of Nigeria’s best player turning heads in the Swedish Allsvenskan, the former golden eaglets nimble feet took his goal involvement for Hammarby to seven with 5 goals, 2 assists in nine league appearances.

Amoo’s header in the 66th minute proved decisive for Hammarby as they went on to pick all three point against Orebro at the Tele 2 Arena in Stockholm.

Czech Fortuna Liga where former Nigeria U23 international Ekpai ply his trade also feature on our score cards for Nigeria players in Europe.

Ubong Ekpai came off the bench in the 72nd minute with a moment of magic when he fired the ball through the goalkeeper with ten minutes left before the end of the match.

Although his goal was ruled out for offside after a VAR check, but the Nigeria international did had a fantastic performance.

Our final score cards on Nigeria players is about Lucy Opara who ply is trade in the Finnish league, the attacking fullback is proving to be a brilliant fullback with an eye for goal.

The 21 year old broke the deadlock as he netted his fifth goal of the campaign for AC Oulu in a 2-0 win against Rovaniemen.

Stephen Odey Named Player Of The Month In Denmark