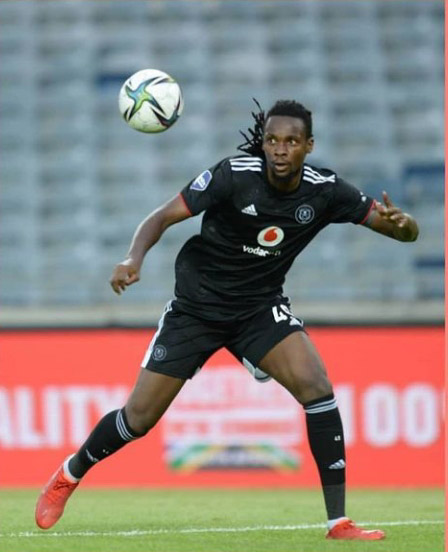 South African based former Akwa United defender, Olisa Ndah was at the center of Orlando Pirates’ big win away from home in Stellenbosch.

It was one of the matchday 12 fixtures played on Wednesday in the South African top-flight league, and the hosts, Stellenbosch, had their quest for the league title put to a litmus test as they welcomed Ndah’s Buccaneers.

Nigerian international, Olisah Ndah, who was on parade for all 90mins kept it all solid at the back to ensure a win and a clean sheet for his South African based side.

Right from the beginning of the contest, it was Stellenbosch who were asking the questions and continued to heap pressure on Pirates in search for the first goal.

Calm and calculated Orlando Pirate side after absorbing all that was thrown to them by the hosts went ahead to break the deadlock at the the 20min off the boot of South African international, Collins Makgaka.

Namibian international, Deon Hotto, doubled the visitors lead barely after two minutes they got their first goal, compounded the woes of their opponents and ended the first half as the better side.

And there came the second half, Deon Hotto, completed his brace for the day off an assist by Collins Makgaka at the 49th minute.

All efforts by the home side, to turn around the scoreline came to naught with the Buccanners carting away maximum points at full time.