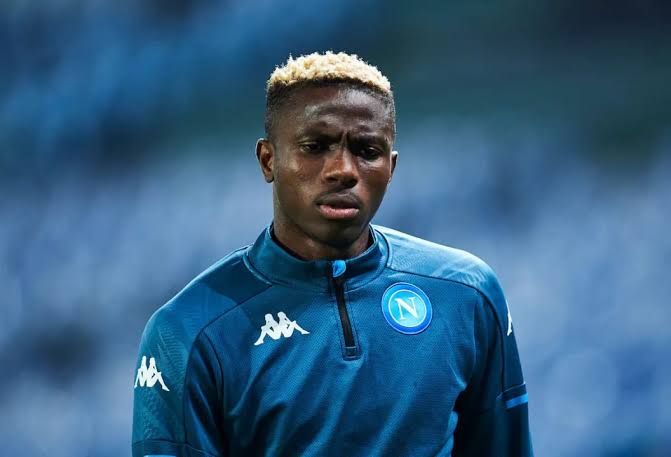 SSC Napoli has refused to rule out the option of taking the Nigeria Football Federation (NFF) to court, should Victor Osimhen go to the Africa Cup of Nations in Cameroon against the club doctor’s advice.

It’s just a month a ago that the former Wolfsburg forward underwent a surgery to repair a fractured bones on his face, after colliding with Inter Milan’s defender Milan Skriniar.

After the surgery the prognosis indicated that the striker would be out of competitive action for two to three months, but Osimhen has seems to turn things around with a quick recovery.

Earlier this week, Napoli doctor Gianpolo Tartaro who operated on the Nigeria international in late November, said it would take a miracle for him to play at the AFCON next month.

Osimhen who is in Nigeria to visit his family is expected to return to Napoli on Friday, for the doctor’s supervised CT scan that would check the improvement on his healing.

While is been reported that Osimhen is tested positive for Covid-19, which would probably rule him out of the competition his planned check up was also postponed due to the report for him to isolate for next ten days.

With Osimhen still in Nigeria, report in Italy has been suggesting that his staying in the country is all about gimmick that would see him go straight to AFCON from here.

As such club lawyer Lubrano said Napoli would sue the federation. “Will Napoli go to court? It is not be excluded for the purpose of compensation by acquiring an official technical consultancy.”

Osimhen is Super Eagles’ leading striker ahead of the 2021 AFCON, as such football loving Nigerian fans would hope to see him play in Cameroon.

Napoli Must Do Everything To Keep Insigne – Materazzi

Cannavaro: Losing Ronaldo Was A Big Blow For Juventus