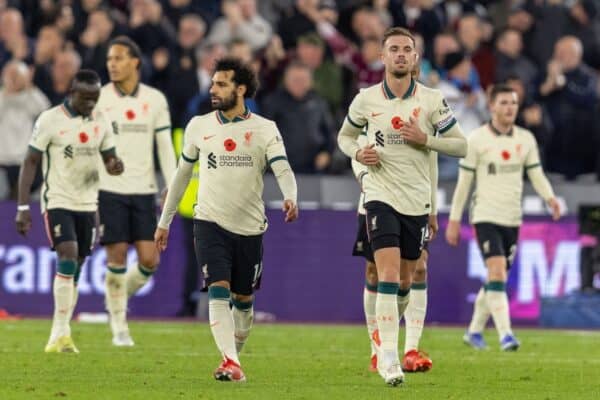 Liverpool would be at home against Arsenal as the misfiring Red side failed in the 3-2 defeat at West ham United last time.

Jurgen Klopp’s men have failed to win their last outing in the EPL and were largely second best against David Moyer’s West Ham ahead of the international break which was their first defeat of the season.

Here, Isagoal.com reveals how Liverpool would be set up ahead of this challenge.

Alisson Becker will be the man between the post for the Reds with the Brazilian backed to reclaim his usual touch after an uninspiring display last time around against the West Ham United side.

Joel Matip should partner Virgil Van Dijk in the heart of the Liverpool defence with Trent Alexander-Arnold and Andrew Robertson set to feature in the full-back positions.

Liverpool has a major injury concern in Jordan Henderson and the Captain’s likely unavailability for the Arsenal fixture could see Thiago Alcantara return to the starting line-up alongside young gun Curtis Jones.

And he would be joined by Portuguese for Diogo Jota and the evergreen Mohamed Salah high up the pitch.

Match day 12;Three key matches to watch in the Premier League this weekend