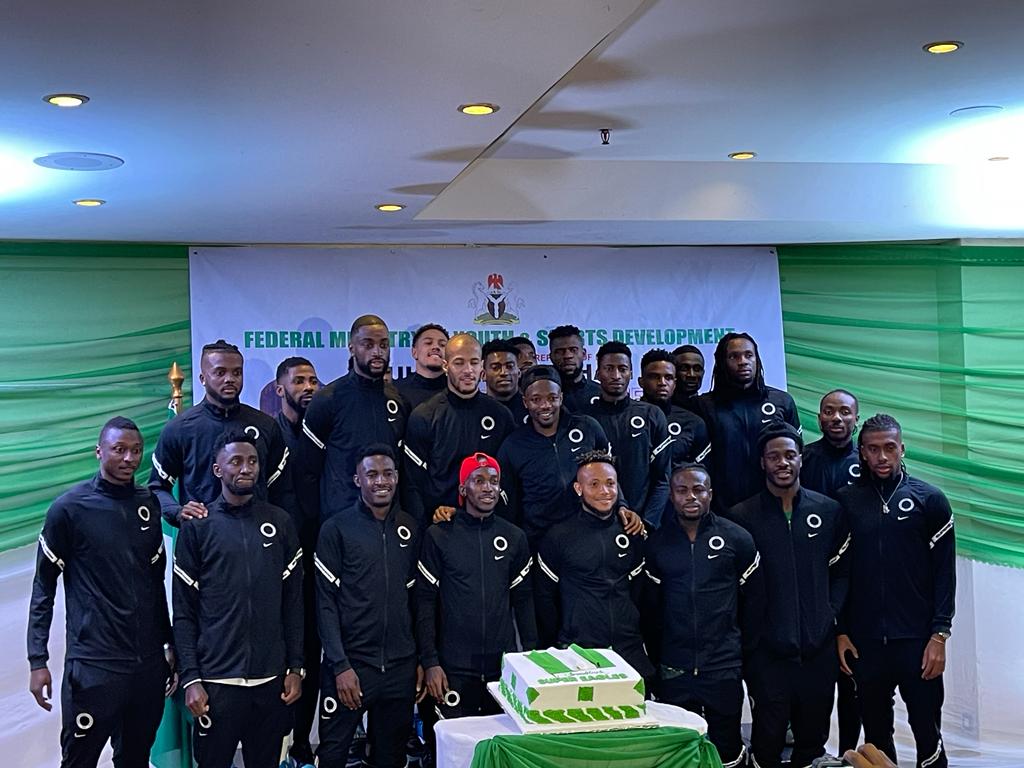 The Federal Government of Nigeria, through the Ministry of Youth and Sports Development, on Tuesday night sent forth the Super Eagles to the Africa Cup of Nations tournament in Cameroon with a dinner.

The well attended event was held at the Transcorp Hilton hotel, Abuja.

Also at the event were the Special Adviser to the Honourable Minister of Youth and Sports Development, Mr Femi Adeagbo, NFF Director of Communications, Ademola Olajire and NFF Director of Finance.

The Honourable Minister of Youth and Sports Development, Sunday Dare in his address to the team, read by Prince Clem Agba, said the Super Eagles are being sent forth as Nigerian ambassadors and worthy representatives to Cameroon as the 2021 Africa Cup of Nations tournament begins in a few days.

According to him, “Mr. President believes this Super Eagles squad has the skills and talents to excel at the AFCON in Cameroon and over 200 million Nigerians are fully behind you.

“Three times we have been Champions of Africa by winning the Africa Cup of Nations(AFCON), that was in 1980, 1994 and 2013, and many other times we have ended as losing finalists and bronze medalists but this time around we want you to strike gold in Cameroon on the 6th of February, 2022 when the tournament’s final match will be played.

“We have followed your preparations for this tournament and have seen the challenges that you have faced with the late release from your clubs, the Covid 19 protocols, injuries and other factors, we urge you not to be deterred by these and rather see these obstacles as stepping stones to your success and glory. We are also appealing to you to demonstrate that Nigerian spirit of determination, focus, resilience, discipline and conquest on and off the pitch.”

Dare also urged the players to have self belief and trust in the coaching crew led by Augustine Eguavoen.

“You have to believe in yourselves, be confident in your own abilities and show trust in your coaches and officials.

“As you carry the hopes and aspirations of millions of Nigerians, be assured of the support of the Federal Government.

“Be patriotic, defend the green and white of Nigeria, fight for her pride and honour like the true soldiers and warriors that you are and this nation will
celebrate you further upon your return,” The Minister added.

In his own remarks, the Permanent Secretary in the Ministry of Youth and Sports Development, Alhaji Ismail Abubakar thanked the Super Eagles for their patriotism and said the dinner was the Ministry’s ‘little’ effort at encouraging them to giving their best and excelling at the biennial continental football showpiece.