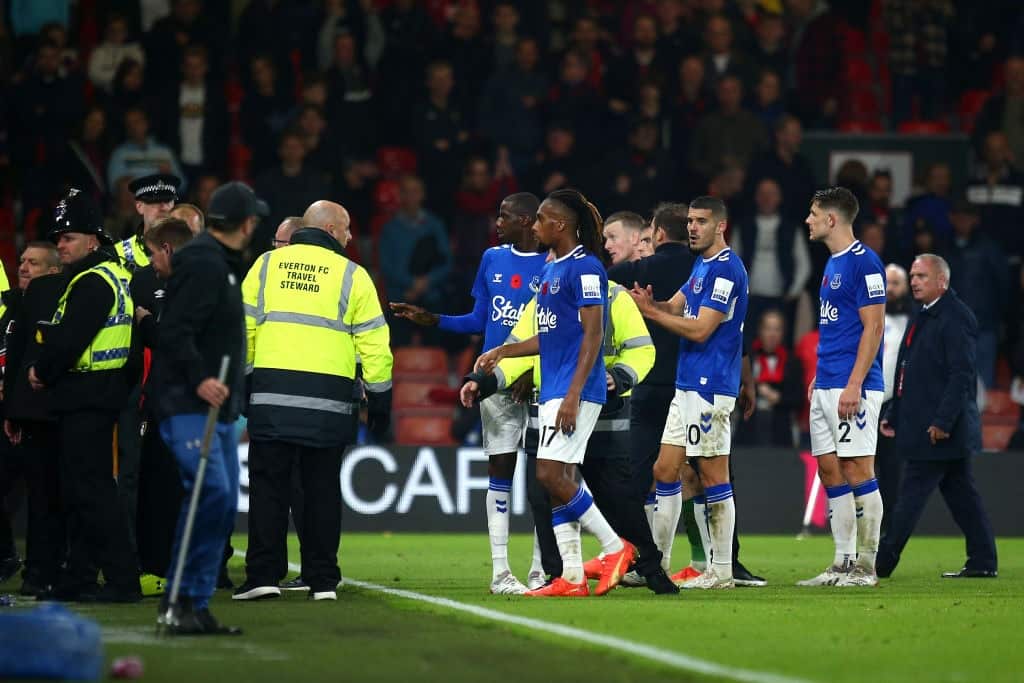 Goals from Marcus Tavernier, Kieffer Moore and Jaidon Anthony gave Bournemouth their second victory over Everton in just five days after their Carabao Cup triumph in midweek, with the result condemning the Merseyside outfit to their sixth defeat in eight matches.

As a result, Everton winger Alex Iwobi saw his shirt thrown back at him by an enraged supporter as tensions boiled over.

The travelling supporters were left furious with their team after the final whistle and made their feelings known when Everton’s players trudged over to applaud them, with some unsavoury scenes unfolding in the away end as several police officers and matchday stewards rushed over to calm things down.

The fans in attendance were quick to relay their frustrations and Everton goalkeeper Jordan Pickford was seen remonstrating with a number of supporters at the side of the pitch before turning his back and walking away from the situation.

Iwobi went on to throw his shirt into the crowd but promptly saw it lobbed straight back in his direction, with Everton’s fans in no mood to sympathise with the Toffees squad after yet another hugely disappointing result.

Everton boss Frank Lampard attempted to pacify those in the stands by making a ‘sorry’ gesture but it did little to calm the fury that was clear to see from the visiting supporters that had made the long trip down to Bournemouth to watch a shambolic collective effort from their players.

Related Topics:Alex IwobiEvertonNigeriaPremier League
Up Next