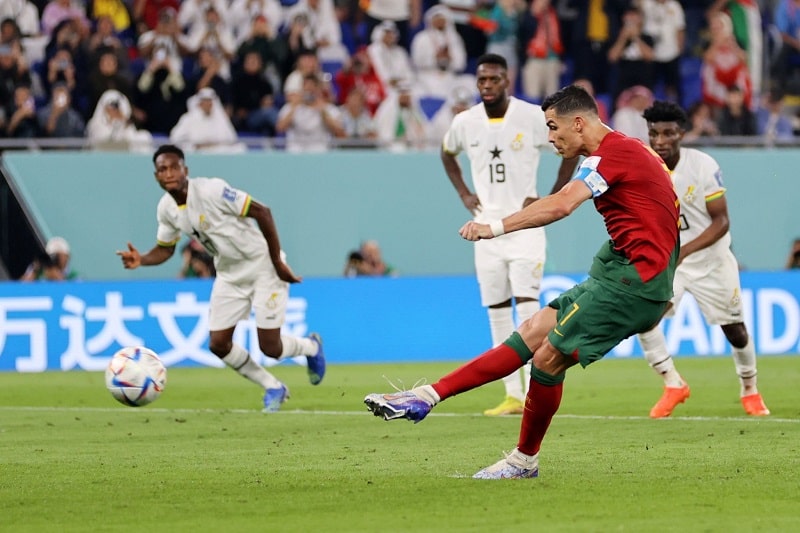 As Portugal kicked off their Qatar campaign against Ghana on Thursday, there was only one player many of the 42,600 boisterous fans in the Stadium 974 came to see, and the indisputable protagonist, albeit in his dwindling state, duly delivered.

Cristiano Ronaldo’s big moment came when he fell in the box after feeling minimal contact from Mohammed Salisu.

Video replays suggested the Ghana defender may have got a touch on the ball, but the referee Ismail Elfath deemed it a foul.

The veteran talisman, who was on the verge of tears during Portugal’s national anthem, drilled home the resulting penalty and wrote his name in the record books to become the first ever male footballer to score in five different World Cups.

Fernando Santos’ side went on to win 3-2 as goals from Joao Felix and Rafael Leao helped the Euro 2016 champions hold out against two late efforts from Ghana.

The hard-earned triumph will be a welcome distraction from the off-field soap opera that has dogged Ronaldo and his team’s build-up to the tournament.

“Cristiano is special because he’s one of the best of all time, playing in his fifth World Cup, and he’s still able to help us a lot,” beamed Ronaldo’s teammate Bernardo Silva. “He proved it again today and we are very happy we can still count on him. Not just the goal but he worked a lot for the team.”

Ghana coach Otto Addo, however, was less impressed. “If somebody scores a goal, congratulations. But this was really a gift. A special gift from the referee,” fumed Addo in reference to Ronaldo’s penalty. “I don’t know whether VAR was paying attention… If you look at the replay, we played the ball. It was actually a foul against us.”