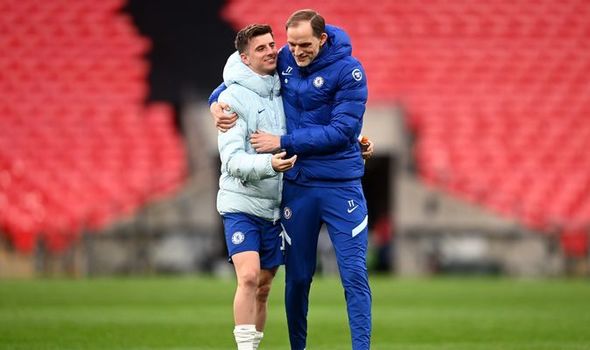 Thomas Tuchel has revealed Mason Mount was unhappy about being dropped for Saturday’s clash with Manchester City.

Mount was introduced from the substitutes bench with 10 minutes remaining as Chelsea went down 1-0 at the Etihad.

Former Blues boss Frank Lampard previously acknowledged Mount’s ‘burning eyes’ when he wasn’t selected, and Tuchel has now been on the receiving end.

“Yeah, I get them and this is absolutely normal,” Tuchel told his pre-match press conference before Tuesday’s meeting with Brighton.

“But it’s still within Mason’s character of kindness and being polite and being respectful, so there is no harm in this.

“I get the eyes, I get the look. I know the look, of course. He is here to play these kinds of matches, but we were simply opting for runners. We thought we could break the line more often with Hakim (Ziyech) as a left foot on the left side and going for Christian (Pulisic) as a right side because of the arrival of Christian in the box.

“Normally, he is a bit more offensive, a bit more of a runner than Mason and we expected the spaces more behind the last line and not in front of the back four from City. So that was the decision.

“I felt Mason not in the 100% zone where he is like untouchable, which he normally almost is. So we took that decision and it can happen from time to time. He’s not happy about it, but it will not last long because everyone loves Mason – me included.”

Tuchel also noted that the absence of Reece James, who is currently injured, has impacted Mount’s efficiency.

“Reece, N’Golo and him were so strong together,” Tuchel added. “This is what we’ve been talking about [relationships on the pitch]: when you turn, you know without even looking he will come now or I will go and get the pass and he will come in, so I will be here.

“We are missing this. And I think, without asking him now, Mason is missing this. He has this genuine understanding with Reece and with Chilly (Ben Chilwell) on the other side.”