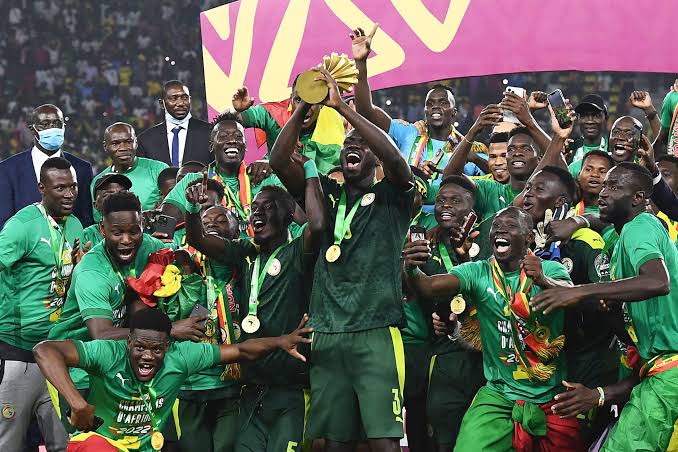 Senegalese President, Macky Sall, has awarded the players in the Lions of Teranga team cash prizes and plots of land on Tuesday following their heroics at the just concluded AFCON tournament in Cameroon.

This president in a ceremony organized for the continent conquerors in the presidential palace in Dakar, also appointed team members to the West African county’s prestigious Order of the Lion, as thousands of fans applauded them outside the gates.

“By your vital force and your creative genius, you have reversed the course of history,” the president said, standing on a podium beside the Cup of Nations trophy.

“We dreamed of the cup, you built this dream and you made it come true,” he added.

Led by Liverpool’s ace forward, Sadio Mane, Senegal overcame Mohamed Salah’s Pharaohs of Egypt by 4-2 via penalty shootout in Sunday’s nail-biting final in Cameroon as the Teranga clinched their first ever AFCON trophy – after over fifty years of failed attempt to win the tournament.

Hundreds of thousands of ecstatic fans also flooded the streets of the city of three million people on Monday – which the government had declared a public holiday – to greet the team as it returned from Cameroon.

“There are no words to express you to our pride, our joy and our gratitude,” Sall said.

The president also urged Senegal coach Aliou Cisse to lead his team to the semi-finals of the 2022 World Cup, held in Qatar.

Playing in AFCON 2021 was a dream come true – Sadiq Umar