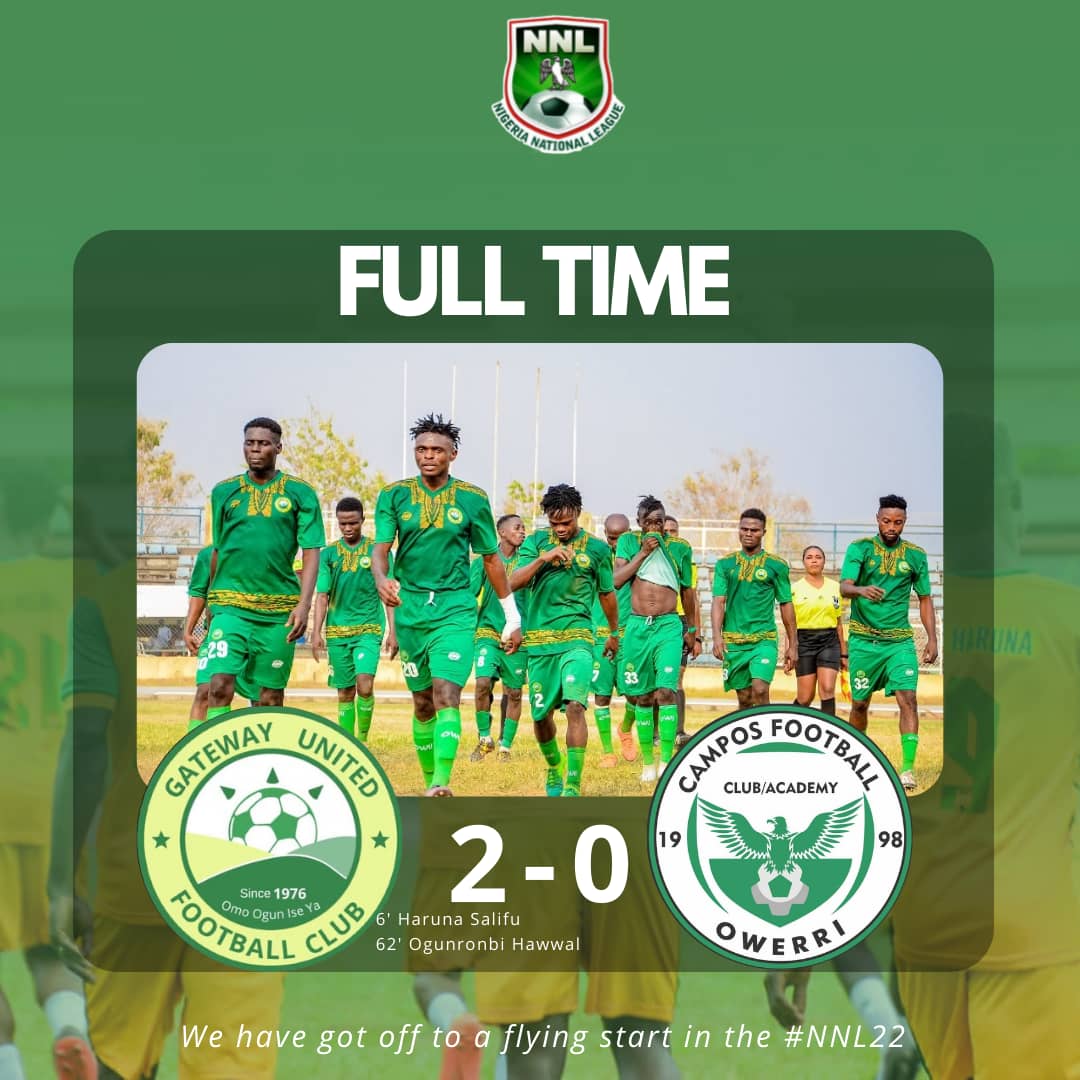 Gateway United got off to a 2-0 home win in the 2021/22 Nigeria National League, NNL opener against Campos FC of Owerri.

Playing at the MKO Abiola Stadium, Kuto, Abeokuta, the Toyin Ayinla led side were the first out of the blocks when Haruna Salifu tapped home from close range as early as the sixth minute.

Sulaimon Ogunleye’s effort inside the box inched away from target in the 18th minute as the home team looked to extend the lead just as a freekick was awarded at the edge of the box after a foul on Sulaimon Ogunleye.

Five minutes after half hour mark, Sunkanmi contested and won the ball in the box, pulled a lovely cross but Haruna Salifu failed to connect to it.

Sunkanmi Odusina, who was having a good first half drove into the box, shot from close range but saw his effort go agonizingly wide just before the half time break.

The first half would end with Gateway United taking the odd advantage into the break.

Two minutes into the second half, Sanni Jamiu came close to doubling the lead with a free kick which went slightly over the bar.

The second goal to ease the home crowd would however come in the 62nd minute, when Ogunronbi Hawwal curled a beautiful low effort into the bottom left corner from 25 yards, a peach of a goal that was.

What was going as a perfect afternoon, had a downside as Gateway United were reduced to 10 men after goalscorer, Salifu Haruna was sent off following a second bookable offence.

Six minutes before regulation time, Olanrewaju Francis came in for Sanni Jamiu in a tactical sub as Campos seemed to be capitalising on their numerical advantage but nothing fruitful came off it.

Goalkeeper, Araromi Ibukun was finally called into action as he made an impressive tip of a deflected ball over the bar.

There would be no further goals from the two teams as Coach Toyin Ayinla and the lads won their first game of the new season comfortably.

Up next for the Ogun State based side is Giant Brillars clash in Enugu on the 19th of February, 2022.