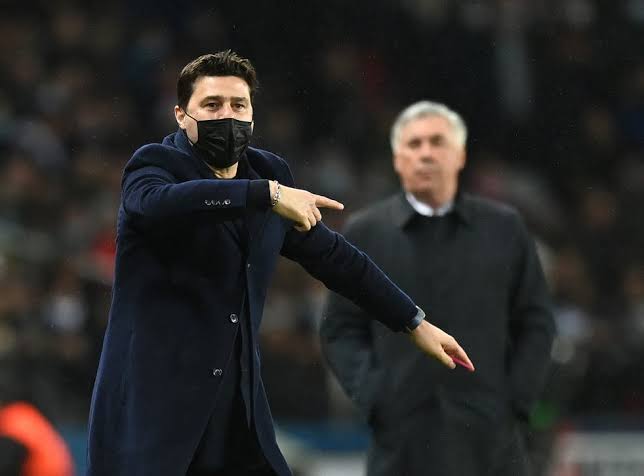 Manchester United’s hope of appointing Mauricio Pochettino as manager could be obstructed as Real Madrid president, Florentino Perez, is considering a swoop for the PSG boss.

Perez is reportedly furious with his side’s performance against the French giants on Tuesday night as Los Blancos’ current manager, Carlo Ancelotti deployed a defensive setup.

Real Madrid would eventually pay for their defensive approach as PSG’s dominance eventually paying dividends in the ninety-fourth minute thanks to a sensational strike from Kylian Mbappe.

The performance of Real Madrid on Tuesday left Perez dismayed at Ancelotti’s conservative tactics, with the Italian set to play to save his job in the second leg next month.

Should the Italian manager be dismissed, Pochettino is the man being touted to replace him at the Spanish capital having been previously linked to the job while in charge of Tottenham Hotspur.

United meanwhile, have also been keen on Pochettino for the past few years and Mirror Football understands that the Old Trafford hierarchy are confident that they could price him away from Paris this summer.

We’re not in the Premier League title race – Chelsea boss

Liverpool legend refuses to rule Reds out of title race