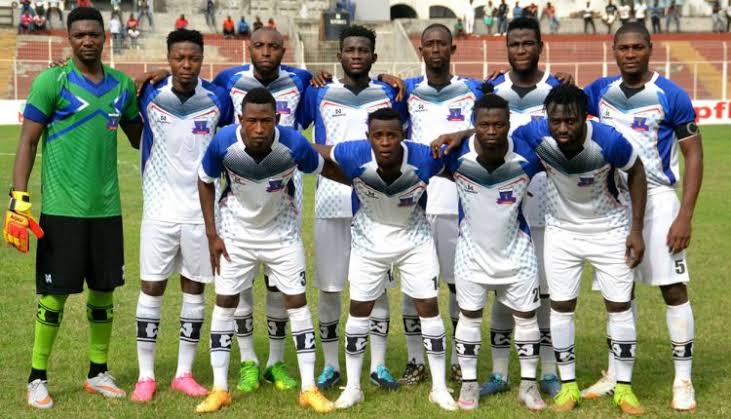 Lobi Stars hope of clinching at least a point in Owerri from Heartland in an NPFL Matchday 13 decided on Thursday, Febuary 17, 2022 in Owerri was dashed as the Naze millionaires put in every effort, both on and off the field to justify the motivation from the government of Imo State, having been struggling below the red line on the NPFL log amidst crisis since the beginning of the season.

A 71st minute strike off the foot of former Lobi Stars drop Nnamdi Egbujuo from Nonso Nzediegwu’s assist was all Heartland needed to put some face saving smiles on the faces of the management and owerri fans.

Nothing suggested that Lobi Stars will end up without anything to show for the efforts put in to the game as every strategy of Coach Eddy Donbraye was aimed at winning the game uprightly.

The quartet of Jackson Daniel, Azeez Shobowale Adams Olamilekan and 3 times man of the match and four goal hero Ifeanyi Ogba kept the Heartland defense on duty but the homers resisted and were coming out from time to time to make incursions at Lobi Stars goal. The nearest of Heartland’s effort from a corner kick on the right side of the field was saved via the extra effort of Moses Tsehuan in the 7th minute and could not recover. Tsehuan was stretchered out and and was replaced 4 minutes later by Ganda Samuel.

A 14th minute free kick to Lobi Stars taken by Ebedebiri was palmed out in to corner kick by Goalkeeper Femi Thomas. The corner kick tussled and returned to Ayagwa Raphael was greeted with a power packed strike but went over the wood work.

Lobi Stars Azeez Shobowale was yellow carded in the 30th minute for a tackle. A 38th minute free kick to Heartland taken by Jonathan Alukwu was rebound in to play, a second shot by Chijioke Jacob hit the post and was goal bound but Stanley Nwabali magically pulled a big save.

A second yellow card to Lobi Stars was issued to rookie Adams Olamilekan for deliberate ball handling in the 40th minute. Another opportunity came in the way of Heartland in the 44th minute as Kingsley Madufuro located Nwadike Peter but his shot at goal had no threat as the watch ticked in to half time scoreless.

5 minutes in the second half, Eddy Dombraye in his rejigging intent, pulled out Azeez Shobowale and Osimaga Duke for Anayo Ogbonna and Ufere Chinedu. Two other yellow cards were issued to Lobi Stars Endurance Ebedebiri in the 57th minute and Samuel Ganda in 62nd minute.

A 66th minute visionary pass from Daniel Jackson to the far right to Adams Olamilekan was returned to the middle of the goal mouth but no team mate was available to convert in to a goal. The tie breaker that gave Heartland the winner came in the 71st minute as Ufere Chinedu’s backward pass was intercepted by the Naze Millionaires and returned to the right in to the firm control of substitute Nonso Nzediegwu to Nnamdi Egbujuo who dribbled Odinaka Francis leftwards to strike beyond the reach of superlative Stanley Nwabali for the only goal of the game.

All attacks from Lobi were at this point been frustrated by the time wasting devices of Heartland which led to a yellow card issued to Goalkeeper Femi Thomas in the 76th minute.

Chinonso Okonkwo and Onyebuchi Onyeaka came in for Adams Olamilekan and Ayagwa Raphael but the aided actions of the Referee and his assistants could not allow for a change in scoreline as the game rolled to an end with the sustained scoreline of 1-0 in favour of Heartland.

Up next: Lobi Stars will be going back to Makurdi to lie in wait for Remo Stars who were bruised at home by Akwa United. Lobi Stars are still maintaining the 13th position despite the loss in Owerri.

We still have a lot of work to do – Jolomi

NPFL: Enugu Rangers pips Nasarawa United, moves to the summit of the league