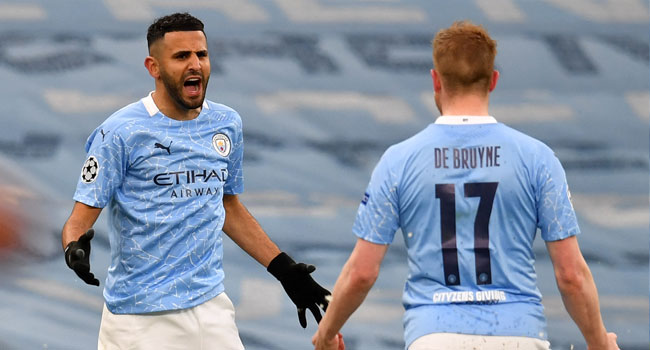 Kevin De Bruyne and Riyad Mahrez were both on target twice each as Manchester City sealed a 4-1 victory over cross-town rivals Manchester United in their derby meeting in the Premier League on Sunday.

City made a flying start as they took the lead in the fifth minute, courtesy of a De Bruyne strike.

Running into the middle inside United’s box, De Bruyne neatly finished off a pass from the left flank to put his side ahead.

After a couple of half-chances that United failed to take advantage of, Jadon Sancho cut in from the left during a counter-attack and curled in the ball spectacularly into the back of the net to level the scores.

However, United failed to clear the ball and De Bruyne took advantage to score from close range.

City dominated the second half and Riyad Mahrez scored with a thunderous half-volley that took a deflection on the way in the 68th minute.

The Algerian winger then put the icing on the cake for City with a goal in the 90th minute to seal a comfortable 4-1 win.