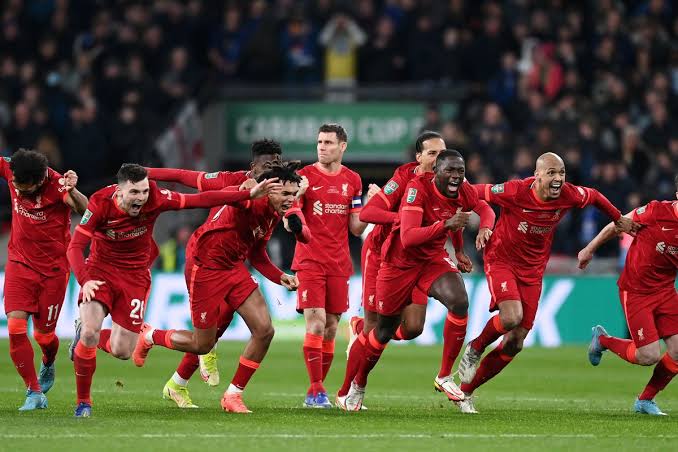 The win sees the Kop bag the trophy for a record of ninth time, the most of in English football and Jurgen Klopp’s tenth trophy as manager.

The game started well for the Blues who’re chasing their third trophy this season. Thomas Tuchel’s side came out with optimum intensity, thus making Liverpool nervous.

The early pressure from the Chelsea almost paid dividends, as César Azpilicueta fired a low ball across the face of goal, to which the onrushing Christin Pulisic met, but his goalbound effort was brilliantly kept out by Caoimhin Kelleher.

The early dominance didn’t last for long though as the Reds gradually found their feet to settle into the game, and started creating chances of their own.

Edouard Mendy was equal to anything coming his way, and the Senegalese goalkeeper made a stunning double save just before the break.

First getting down low to deny Naby Keita from range, he then quickly got back up to face his compatriot Sadio Mané, whose rebound from just a few yards out was incredibly kept out.

The second half began the same as the first, with Chelsea on top but failing to take advantage of their dominance.

First Pulisic failed to get on the end of a teasing cross from Kai Havertz and just moments later, Mason Mount was played through on goal only to be denied by the woodwork.

The deadlock was broken minutes later as a well-worked Liverpool set-piece saw Trent Alexander Arnold’s freekick headed back across goal from Mane, where Joël Matip was there to nod in.

The goal however would be chalked off after a VAR review though, the goal was disallowed due to an offside in the initial freekick.

Both teams dispatched their pens with aplomb, with none of the outfield players missing, and it fell to the two goalkeepers.

Kelleher smashed his spot kick in, and the onus fell on Kepa Arrizabalaga who was brought on to save the pens, but instead he missed the vital penalty, resulting in Liverpool winning the shootout and trophy.