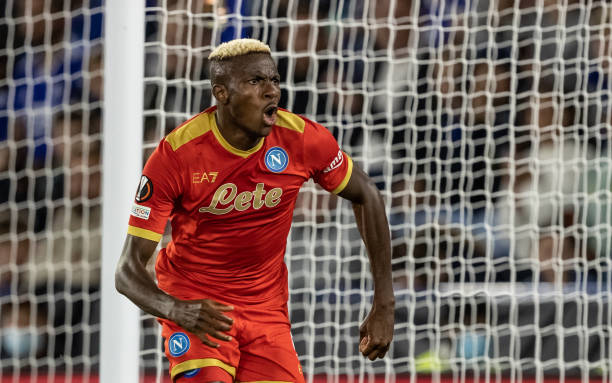 English Premier League side, Arsenal, has named Nigerian and Napoli forward, Victor Osimhen as a potential transfer target after missing out on the chance to sign Vlahovic.

According to reports from the Italian news tabloid, the 23-year-old vivacious Nigerian has become a target for the North London side as well as Newcastle United.

Newcastle are flush with cash under new ownership from the PIF, the Saudi Arabia investment fund believes they can go head to head with Arsenal for the striker in the current window.

Osimhen joined Napoli in a €70million deal from Lille two years ago and has scored 19 goals, despite being unlucky with injuries.

Both Arsenal and Newcastle United are in desperate need of a striker to rescue their season with Arsenal hoping to seal a place in the top four place while the Magpies are in the battle for a survival from relegation.

The two English sides are believed to be ready to shell out a fee around €75m, if Napoli are ready to sell.

According to the Gazzetta, Napoli President Aurelio De Laurentiis would be prepared to sell for at least €70m.

The 23-year-old has already scored nine goals in 16 competitive games for Napoli this season.